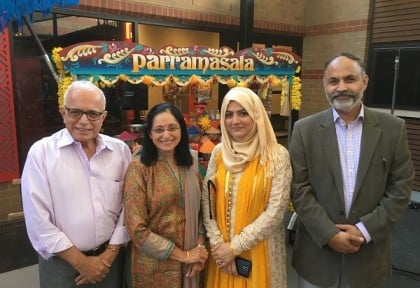 After laying low last year, Parramasala was celebrated in the month of ‘Multicultural March’ at Prince Alfred Square and the Parramatta River Foreshore on 10-12 March.

The festival, that aims to share a slice of the whole cultural melting pot that Western Sydney is, evokes a lot of interest amongst the region’s communities and hyphenated identities. Many of these were visible in the Opening Night Parade that started off from Centenary Square and filled Church Street, the main artery of Parramatta, with a whole lot of colour and chutzpah.
The parade saw participation from over 30 communities in their traditional attire – Armenians in their arkhaluks, Chinese in their beautiful silk dresses and exquisite hand fans, and Balinese children in intricate animal masks depicting their heritage and culture. The Indians came with their dholaks and kartalas (clash-cymbals), the Brazilians with their Samba and djembes and various dance troupes bearing proudly the flag of their traditions and cultures.

Cheering the parade loudly were passers-by and pedestrians on kerbs and foot-paths, regulars out for a Friday night at their favourite pubs and cafes and raising a toast as their communities strutted through in all their traditional finery.
Prince Alfred Square, the main venue for the festival and a cornerstone for the suburb, was decked up with festoon and fairy lighting; music and dance performances lit up the stage, camel and Ferris wheel rides brought us back to our childhood, and the whiff of many flavours whetted our appetites.
Henna and face-painting stalls, and the Adorned Headdress workshops set the pace in the morning with Bobby Singh delivering the morning ragas. Pakistani truck artist Riaz Rafi painted exotic motifs and patterns on a van at the middle of the square, a kathak-flamenco fusion graced the dance stage, Vietnamese artist Mai Khoi filled the air with her melodious tunes.

Bengali choir Protitee sang from Tagore, Salil Chowdhury and Nazrul. Leela Samson, internationally acclaimed Bharatnatyam dancer (and also “Aunty” from O Kadhal Kanmani and its Bollywood remake OK Jaanu) brought her group Spanda to Australia for the first time.
The River Foreshore had a range of aboriginal workshops and performances, including ochre tree painting, weaving, puppetry and story-telling.
Such was the gamut and range of performances.

The most popular crowd-puller was Indo-Balinese version of Ramayana – the Lord of the Ring, featuring 50 local and international artists, 20 Gammelan and South Indian classical musicians, 30 Kecak, Bharatnatyam and Indonesian dancers, depicting a story integral to both Bali and India.
The Parramasala pantry at the Riverside courtyard sent delicate and fragrant whiffs of spices in the air enticing us with all the magic that was being cooked in there. The live cooking demos saw Nilgiris Chef Ajoy Joshi to a completely-packed Pakistani demo by Furqan Lodhi. There were samples of Jamaican, Croatian and other cuisines on display as well.

Although the cuisines and cultures were many, not all the various and multifarious communities from the suburbs of Western Sydney were represented equally, which posed a problem for patrons who came looking for something and got something else in return. This was received at times with a sense of new discovery and a ‘let’s see what’s in store’ attitude, and at times with mild dissatisfaction and disappointment.
People expect more from Parramasala as it is Sydney’s only festival with an ambition of such scale trying to represent so many cultures, and it does have all the necessary ingredients in terms of venue, interest from patrons and artist collaborations. Yet what it lacks is the right amount of spice, and a more focused approach.
To read more about Parramasala 2017 click here