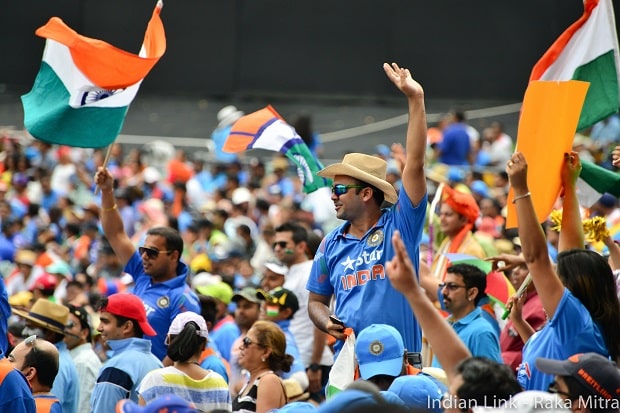 Reading Time: 5 minutesIndian cricket fans from all over Australia flocked to the South Australian capital

Anuj Kumar could not believe his luck.

The Melbourne-based IT consultant had missed out on tickets to the India v Pakistan World Cup match and had been trying for more than a year to source them. Less than a week before the 15 Feb game, a mate from Adelaide, Grishm Bhatt, called to say he had two spares.

His wife Divya and he joined some 40 other friends who drove down to Adelaide in a convoy of eight cars. Among these were Rishi Bhatia and his family, who had purchased their tickets way back in December 2013.

As cricket-tragics descended on Adelaide from interstate and overseas, they were in for a day of singing and dancing and revelling, and oh yes, a bit of cricket too.

It was not just the stadium that was awash with blue that day, but much of the city too. The hastag #BleedBlue trended on Twitter and #JaiHind became the first Hindi hashtag to trend.

Adelaide was like a city on the subcontinent; the streets were busy, and there were little kids, elderly parents, full families, all out to have a good time, and cheer on their national teams.

“That it was 39 degrees didn’t matter at all,” Anuj told Indian Link, speaking no doubt for the 42,000-odd people at the Adelaide Oval.

It was the Indian community in Melbourne, yet again, that showed the true desi spirit, driving down in multiple cavalcades, their Sahara t-shirts dotting the route at many pit stops.

Indian Link’s Melbourne Coordinator Preeti Jabbal and her husband Ravinder also drove out with a large bunch of friends.

“On the nearly 10-hour drive you couldn’t but help come across other similar cavalcades,” she said. “There was one group that spread the word on Facebook about an Indian convoy. They gathered at Desi Dhaba, a local Indian restaurant, had a meal of parathas and samosas and then set off in their cars draped in Indian flags.”

Hardev Rindani, a Wollongong-based medical practitioner and cricket tragic, knew he was in for a good time even as he boarded his flight to Adelaide in Sydney. “Some three quarters of the plane was filled with people headed for the Adelaide Oval,” he laughed

Unlike many in the crowd though, Rindani had seen the two teams play each other before.

“I was at the India-Pak game at Sydney during the 1992 World Cup as well, but this time round, it was something else! The celebrations before and during the game were just full on. And I saw way fewer non-South Asian spectators. This might well have been Mumbai or Chennai!”

It’s that festival-like atmosphere that most people are talking about now, days after India defeated Pakistan to launch its World Cup defence campaign. Kohli’s match-winning century, and that articulate speech at the end, come but second and third as highlights from the event.

“It was full-on party mode,” Megha Rastogi, a federal government employee from Sydney, recalled. “There were fancy dress policeman outfits, wigs, Bollywood music and dances… it will be a lifetime memory for me.”

Brisbane-based electrical engineer Ratnang Rushi and his mates turned up dressed in orange hats, white shirts and green pants, and found later that they could not take their hats off for fear of being considered Pak fans with the green and white. “But the crowd was blue for sure!”

His Dubai-based sister saw him on TV and Whats-apped him instantly.

“Virat came to our boundary line at one stage and the crowd went absolutely wild,” Rushi related. “But he sort of chastised us. ‘Why are you going ‘Kohli, Kohli,’ he said. You should say ‘India, India’.’ Of course the crowds obeyed, and louder than ever!”

For a young Indian couple from his city, Priyanka and Ashwini, it was not a happy start. They stood forlorn outside the East Gate, having flown in from Brisbane that morning with their three-year-old, their tickets rejected as unauthorised. They had booked two tickets online for the whopping price of $600, taken for a ride by a dubious agency. However, as luck would have it, a gentleman with two spare tickets for a decent stand, helped them out. Given the way the game unfolded, this couple too would have been singing and dancing all evening!

The Jabbals’ fun-loving group arrived armed with face paint, tricolour pagdis, wigs, banners and flags, adding to the spirit that was alive and happening.

“We sat with the Swami Army and I must say they made it so much more fun for us,” Preeti said. “Their enthusiasm did not wane one bit as the day wore on. Every single run was cheered wildly, not just your fours and sixes.”

The crowd looked like it was outnumbered nearly 8 to 1 by the blues as compared to the greens. And though there was friendly rivalry, there was no hostility.

“There was one strong section in the crowd made up of green supporters but it was mostly blue,” Preeti observed. “I felt sorry at first for the lone Pakistani ranger who sat in our section, feeling a little awkward. Turned out he was from New York and did not know there would be a Pakistani section in the crowd. But very soon, dosti yaari ho gayi (we became friends) and we were buying each other drinks!”

“It was all peaceful, as we were all out to have a good time,” Rishi Bhatia agreed. “Towards the end the Pakistanis around us joked with us that only a miracle could save their team now! At one point when I was outside, a Pak fan in a green jersey, a total stranger, told me to rush back in as Kohli was about to score his century. It was hardly like Wagah Border in there. Afterwards at dinner we met many random green jerseys, and everyone was friendly.”

The juveniles at Sydney’s Merrylands RSL Club who clashed violently during the game, should take note.

“I was engulfed in the festival atmosphere, that ambience, that masti… it was wonderful,” Preeti offered instead. “I’m not even a cricket fan. I went along because friends asked me, and actually took a book because I thought I’d get bored. But that never happened. The game was secondary, even though Dhoni and co pulled it off. Izzat rakh li hamari, jo dus ghante gaadiyon mein bhar bhar ke aur planeloads me aaye the!” (They lived up to the expectations of those of us who got down there, driving for ten hours in carloads, and in planeloads!)