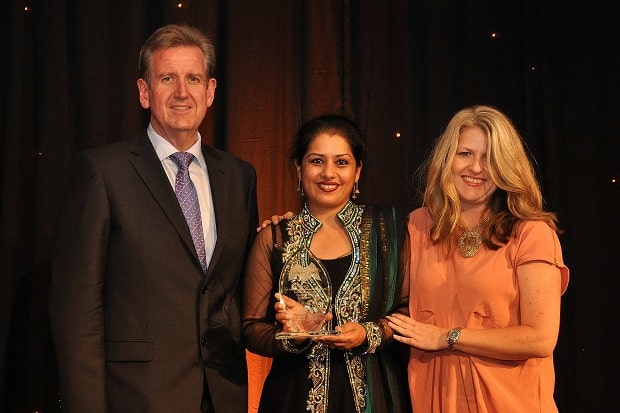 SBS Radio Punjabi’s Executive Producer Manpreet Kaur Singh added more feathers to her cap recently by clinching two awards in the 2014 NSW Premier’s Multicultural Media Awards held in Sydney. Manpreet’s multi-award winning feature The Enemy Within was recognised as the Best Radio Report and Best Feature of the Year (any medium) during the ceremony.

The report which was first aired in December 2012, confronts the issue of domestic violence within the Australian Indian community. It is a compelling dissection of family abuse through the voices of the victims, the police, experts and the court system, and it has struck a chord with the community on many different levels.

“The documentary was commissioned by SBS in 2012”, Manpreet told Indian Link. “It took around four months of intensive investigative work to complete. During this time we consulted with authorities, experts and victims in Melbourne and Sydney to portray an honest picture of domestic violence within the Indian community in Australia. We presented seven stories by interviewing victims directly; of them, one couple and one victim are now deceased as a direct result of domestic violence”.

The report aimed to determine whether Indian culture and circumstances like arranged marriages and migration make domestic violence unique in this community.

“We have asked the experts and the victims, and now it is up to the people to decide”, she added.

Regarding the reaction of the Indian community to this report, Manpreet said, “It was an honest appraisal of questions everyone asks. The response has been strong and mostly positive where people have realised that they have to stop being in denial and do something about it. But at the same time, there has been some negative reaction with people arguing that the victims are partly to blame too. For the wider community though, the documentary has been an eye opener”.

Manpreet regards the documentary The Enemy Within as the most difficult and complex story she’s handled professionally.

She is deeply moved by the plight of victims of domestic violence in the Indian community and feels a need to make a difference. She believes that although a lot is being done in this regard, it is not enough.

“There is a need for community organisations, government agencies and welfare groups to come together and work as a unit in understanding the intricacies of the Indian culture and address family violence accordingly”, she averred.

“Currently in cases of domestic abuse, the government wants the police to be the first point of contact, but most Indian victims will not do that as it escalates the issue to a point of no return. Cultural orientation is necessary to handle different cases appropriately and sensitively”, she added.

After the resounding success of the Punjabi broadcast, The Enemy Within was remade in English and aired in August 2013. It received the United Nations Association of Australia Media Award in the special category ‘Increasing Awareness and Understanding of Women’s Rights and Issues’ and was also a finalist for the Walkley Award in the same year. This makes Manpreet the first Indian-origin journalist in Australia to be nominated for the Walkleys.

Manpreet insists that though it is gratifying to be recognised, she didn’t make The Enemy Within to win awards. She maintains that she has done many stories on sensitive issues, and purity of intention and compassion has been her strength in getting the message out.

“I have utmost respect for every victim who spoke to us in making this documentary,” she said. “We can’t imagine what they go through, so let’s not waste their bravado and do something to bring about a change”.

Even though she is best known in Australia as a radio broadcaster, Manpreet’s contribution to other branches of journalism, in print, television, radio and online media, cannot be ignored. But radio is her medium of choice.

“To be honest it was the only medium that gave me a break when I came to Australia,” she revealed.  “The work we do is totally spontaneous and unscripted. People let us into their homes where we have intimate conversations with them that are straight from the heart. People open up more on radio as it provides the element of anonymity.  I wouldn’t change anything about it”.

For someone who has received considerable recognition, Manpreet is surprisingly down-to-earth and friendly.

She has received many awards including the Media Award at Victoria’s 2013 Multicultural Awards for Excellence in December 2013, and the state’s Individual Award for Media Excellence in 2011.

Manpreet is passionate about preserving the history of Indian arrivals in Australia and contributes articles to the reputed website Sikhchic.com.

A significant highlight of her career has been fulfilling the last wishes of a Sikh hawker Pooran Singh who died in Australia in 1947, and wanted his ashes to be returned to India and sprinkled in the river Ganges. Manpreet was instrumental in fulfilling this wish through uniting people from India, Australia and England in this goodwill mission. This story has now been commissioned by Educational Services Australia as an educational resource for high school students in Australia.