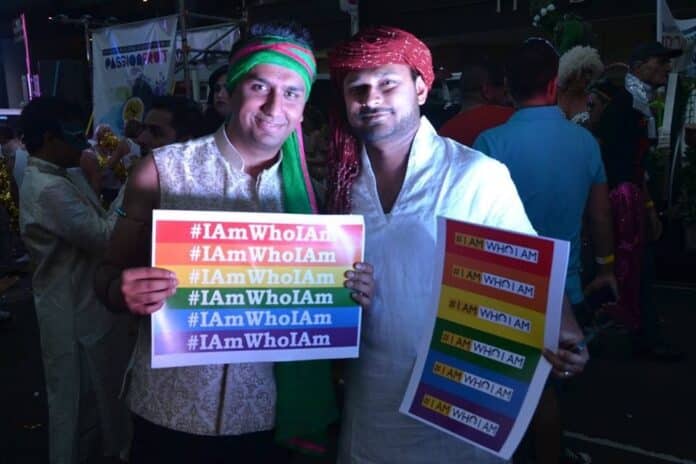 You could say Queen B is a Mardi Gras ‘veteran’.
He’s been participating in Mardi Gras, Sydney’s annual gay and lesbian parade, for ten years now, proudly flaunting his Indian background.

Today he’s a transgender Board member of Trikone Australasia, a community organisation made up of South Asian LGBTQI members.
In his role, he helped some 50 peers prepare for this year’s event, held on Saturday 7 March.

The Indian float was one of 150 floats that made up the ‘river of queer humanity’ that marched down Oxford and Flinders Streets.
The ‘Bollywood’ connotations – of a fashion style and music beat rather than the film industry – have always made the Indian float eagerly awaited, its colours catching the attention of the TV crews and photographers.
With their theme this year, ‘Bollywood is the new black’, Trikone made a statement about the increasing popularity that India’s entertainment industry has begun to enjoy in the mainstream.

Perhaps such acceptance will extend to the members’ own lifestyle choice, both within and outside the Indian community.
Of course Queen B’s Mardi Gras appearances predate Trikone’s participation, which began in 2008, but his passion for it continues unabated.
“Like every year, I felt proud again this time as I walked alongside my friends,” Queen B told Indian Link. “Our music was specially picked to include dance-based, drum heavy, peppy numbers, and the crowds cheered to the beats as we passed by! People loved us!”

The 50-member troupe had more girls than boys participating this year. Participants from India and UK joined in as well.
There was much less flamboyance in the outfits this time round, with the stand-out get-up being the belly-dance costume with the large feathery Mohawk.
The number 377 popped up, as expected, in placards (‘377 No Going Back’; ‘Say No to 377’) referring to Section 377 of the Indian Penal Code that still criminalises homosexuality.
For more news from Sydney’s LGBTQI community, check out www.trikone.org.au