Our community in numbers 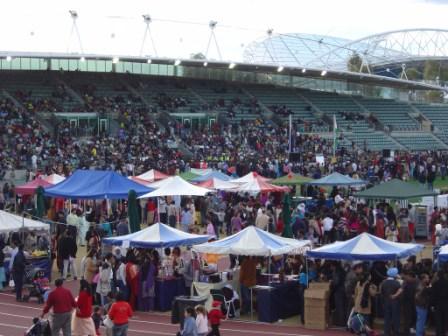 SBS recently launched an interactive online tool featuring demographic data gathered in the 2011 Census, so that Australians can explore the results of the Census data. SBS Census Explorer gives Australians access to some of the most important Census data, bringing it to life in maps, charts and graphs that are interactive and easy to read. Users can compare languages and places and learn more about the makeup of their communities. Information is being progressively added as it becomes available from the Australian Bureau of Statistics (ABS).

Indian Link reviewed demographic data released to offer a concise census of information on the Indian community. Here are our findings.

35% reported difficulty in getting one. Of this, 64% reported lack of experience or references

53% in their area of expertise

43% of recent migrants had obtained citizenship

55% of temporary residents were students.

These figures released by the Australian Bureau of Statistics after unveiling the latest five-year Census only confirms what most already suspect – that skilled migration and international student intake has fuelled a dramatic spurt in the Indian presence down under in the new millennium. From .5 to 1.5% of the Australian population which currently stands at 22.6 million, Indian origin people now number 340,604.

The estimated resident population (ERP), a core function of the ABS, is used for a wide variety of purposes including the distribution of Australian Government funds to state, territory and local governments, as well as in the determination of the number of seats for each state and territory in the House of Representatives.

The Indian-born community more than doubled between 2004 and 2009 to 308,542, making it the second largest non-Anglo community in Australia after Chinese-born Australians. In 2009 there were an additional 90,000 Indian students studying at Australian tertiary institutions.

As of 30 June 2010, 27% of the population was born overseas (6.0 million people), third highest in the world behind Singapore and Hong Kong, the lowest being China, India and Vietnam.

While UK and NZ still account for the largest chunks of the pie, India and China have moved up the ladder. 76% of the overseas population in this category was of working age 15-64.

International migration is a volatile phenomenon influenced by a wide range of demographic, social, economic and political determinants and consequences at the global, regional and national level.

In 2009-10, the preliminary estimate of net overseas migration (NOM) was 215,600 persons, representing 57% of Australia’s population growth for the year. Victoria and Queensland had the largest inflow.

In 2008-09, the net number of international students being added to Australia’s population reached an all time high of 122,400 students, bringing in export earnings of $15.9 billion. These international students contributed to 27% of Australia’s population growth in 2008-09. Of these, 45,199 were from India alone, jumping significantly from 9553 in 2004-5. Nepal was third highest at 10,697. Victoria had the highest intake at 45.7% followed by NSW at 20%. 55.4% enrolled in VET, while 43.7 were in higher education. Significantly these figures show a sharp decline for September 2010, contributed by drop in arrival and increased departures

For 2008-09, there were 324,100 self-reported temporary NOM arrivals who contributed to NOM (see table 3.18). This was 62% of all NOM arrivals with the remainder being permanent arrivals, Australian residents returning and a few from other categories. Of the countries of birth contributing to temporary NOM arrivals, India added the most with 53,900 persons arriving, 60% of India-born arrivals reported education as their main reason for journey, followed by Nepal (59%), and Malaysia (54%).

We cast a look here at the language-wise break-up of the Indian community in Australia.

The largest linguistic group seems to be Hindi-speaking Indians, followed by Punjabi and then Tamil. But many Indians are multilingual. Speaking to Indian Link at the multicultural briefing, Dr Jill Charker, First Assistant Statistician of the Population, Education and Data Integration Division revealed that there are plans for greater community consultations on the questions which can be asked in the next Census in 2016 which can bring forth more information about the population. For the Indian community, for example, questions which can be put up for consultation can include asking people about the number of languages they speak rather than just a bilingual question.

There are 111,351 Hindi speakers (.5%), of which 53% are from India and 29% from Fiji. Most of this demographic arrived since 2000. Of these, the largest concentrations are in Blacktown (NSW) which accounts for 1969, while Point Cook in Victoria, Forest Lake in QLD, Canning Vale (WA) Prospect (SA) have 926, 275, 180 and 113 respectively.  The largest demographic is in 25-29 years. 60% have taken Australian citizenship, while 96.8 stated parents born overseas. Hinduism is predominant religion followed by Islam and Sikhism. Most households had 4 people and owned property with a mortgage. .3% acknowledged being in a same sex relationship.

Representing .3% of population, Punjabi speakers total 71,320 across Australia, with Blacktown in NSW accounting for single highest concentration (1894). St Albans came a close second with 1433 Punjabis. WA’s Canningvale, QLD’s Runcorn and SA’s Prospect were other favourites. Predominantly Indian born and of Sikh faith (80.9), most arrived since 2000 and highest demographic is in 25-29 age group. The male female ratio is 60:40. 60% were not Australian citizens. More than half the Punjabi households had one child, while 45.6% lived in rented properties. While heterosexual marriage was generally the norm, .1% admitted to same sex relationship and 1.2% were in de facto partnerships.

35,645 Bengali speakers in Australia represent .2% of population. NSW suburb of Lakemba recorded highest number (2483). Footscray in Victoria, Forest Lake (QLD), St Marys (SA) and Canningvale in WA topped individual concentrations. Of these 71.9% are from Bangladesh, 9.6 from India. Migration trends have increased phenomenally since 90s. A majority are Muslims and 58% have taken Australian citizenship

34,211 Gujarati speakers call Australia home, with NSW suburb Parramatta alone accounting for 1310. Darch in WA, Hawthorn in Victoria, South Australian suburb of Prospect and QLD’s Macgregor were the popular suburbs. 75.8% Gujarati Australians were born in India and 5.4% in Kenya. In the last decade, the number rose from 554 to 1570.  Most Gujaratis recorded both parents as born overseas. Majority are not Australian citizens (58.7%), their largest age demographic is 25-28. Most males earned average of $600-800 a week, while most females earned nil. Household income for 18% stood at 78,000-104,000.

Marathi Australians numbering 8572 in Australia are predominantly Hindus (90.7%). A three-person household, comprising a couple with one child is the dominant trend, with 46% paying off a mortgage. Nearly 18% households earned more than $74,000. 77% Marathi speakers identified themselves as married. Liverpool (NSW), Glen Waverley (Vic), Nundah (Qld, Mawson Lakes (SA) and WA’s Canningvale have the largest numbers in a suburb

With over 50,000 speakers, Tamils form the third highest demographic. Of these 39% are from Sri Lanka, while 35% are from India, and Malaysian Tamils account for 15%. 62% have taken Australian citizenship. Wentworthville in NSW recorded highest number of Tamils (1073), with Glen Waverley (946) coming a close second. Mawson Lakes (SA), WA’s Canningvale and Forest Lake in QLD were popular. Most Tamils had 4 member households, with children under age of 15. 15.5% earned over $74,000 annually and 47.8 % owned property on a mortgage. 69.7% were married, 30% were single and .7% in de facto. Hinduism is key religion, while Catholic came second at 10%. Only 2/3rd were not Australian, while over 98% indicated overseas parentage. The main influx of Tamils has been in late 2000s.

Among the dominant ethnic minorities, Parafield Gardens (SA) and Perth suburb of Maylans were predominant choices. The Kannada community is relatively smaller at 5923.  The NSW suburb of Liverpool proved most popular, while Victorian Kannadigas chose Dandenong. In Calamvale in QLD, 91% are Hindus and 84% were born in India. Kannada households typically had 3 people and most families had children under age of 15. 78.3% were registered marriages and .8% in de facto relationship. 17.8% Kannada households had income of $78,000-103,000 annually.

Australia is currently home to 18,721 Telugu speakers, most of who were born overseas and half of whom live in rented premises. Westmead in NSW (729), Footscray in Victoria (280), Kenmore (Qld), Mawson Lakes in SA (44), Maylands in WA (60) have largest numbers respectively in one suburb. 58% of the linguistic minority is yet to opt for citizenship and 98.25 have both parents born overseas. Hinduism is the dominant religion. 15% males earned above $74,000 while 34% of females had no income. Single child is the dominant trend.

25,111 is the current number of Malayali speakers across Australia. Dandenong in Victoria (425) and Westmead in Victoria (253) have the highest concentration state-wise, while Annerley in Queensland, Woodville Gardens in South Australia and WA’s Canningvale (193) registered the largest numbers. The largest age demographic for male Malayalam speakers was 30-34 years (16.9%). Since 2000, their numbers have increased from a meagre 246 to 2809, nationwide.  65% are yet to opt for citizenship. Catholicism is the predominant religion, cornering a sizeable 47% of the demographic. Other faiths include Syrian Orthodox, Pentecostal and Anglican besides Hinduism, of course. 80% are in a traditional marriage, with the average Malayali household having two children. A sizeable 43% live in rented homes, with those having mortgage coming close second at 39%. The largest age demographic is 30-34 years.