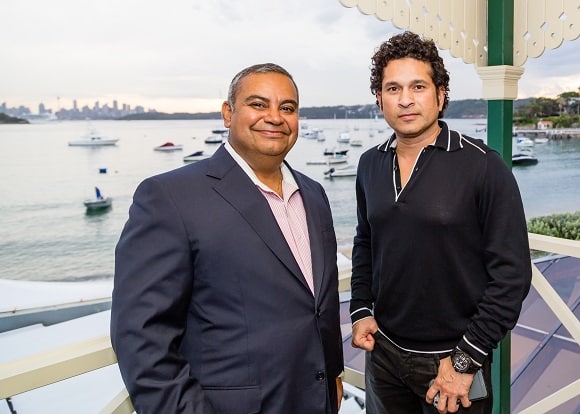 Reading Time: 5 minutesThe Sydney dinner with cricketer Sachin Tendulkar was billed as a once-in-a-lifetime opportunity. What would you call a chance to interview him in front of select guests?

Now I know what it would be like to be in a mid-wicket discussion with the Little Master, with one ball remaining and four runs to score.
After spending an hour conducting a Q-and-A session with Sachin Tendulkar, arguably one of the most talented cricketers the world has seen, I am sure his fine cricketing brain and down-to-earth approach would have settled my nerves and motivated me to enjoy the moment and give it my absolute best, without letting the expectations of others cloud my judgment.
Life does move in mysterious ways. A week before the exclusive dinner on 26 February, I had no idea that this special privilege was in store for me.
A call came through to the offices of Indian Link from a gentlemen called Brett Head of Lookahead Productions, wanting to discuss the options of promoting a fund-raising dinner with Sachin Tendulkar.
“I picked you out from Google,” he informed me when I asked how he had heard of us.
A few meetings later, and after discussions with Sachin’s management team in India, the dinner was on.
The MC role for the evening went to yours truly.

Brett’s vision was for an exclusive dinner for about 40 people at an élite restaurant in Sydney, with all proceeds going towards Sachin’s favourite charities.
The restaurant, though, had to be Doyle’s seafood restaurant at Watson’s Bay, Brett was adamant.
“It is Sachin’s favourite restaurant in Sydney,” he revealed. “I had dinner there with him last year when he was here to receive his Bradman honour. With its seafood, its beach location and the Sydney city skyline in the background, Tendulkar felt that this was a quintessential Australian restaurant.”
Later that week, Brett would recount on Indian Link Radio tales from that very same dinner last year, speaking with broadcaster Priyanka Tater. “We sat at our table, long past closing time, enjoying the sea breeze and the city lights. A young man walked past, staring at Sachin. Sachin watched and then got up and called out to him to come and join us. I was completely bowled over by his gentle earthiness and friendly behaviour.”

Within a week of promotion on Indian Link’s various platforms and Brett’s calls to his own network, the charity dinner was sold out.
The highlight of the evening was to be a casual question-and-answer session with Sachin. Much to my surprise, a day before the dinner Brett requested that I take over the Q-and-A as well. Of course I thought long and hard about this… and accepted immediately!
And so it came to pass that I spent about four hours with the one and only Sachin Tendulkar.
While Ritam Mitra and Robyn Sefiani write about the events from the evening elsewhere in this edition, my take away from it all was that Sachin Tendulkar is one of the most grounded human beings one can encounter. He has firm views on a number of topics and is not afraid to share these. In fact, many had warned me that Sachin would be difficult to draw out in a conversation. They could not have been more wrong. What was scheduled as a 30-minute interview was still going strong after a full hour. Sachin spoke eloquently and with great detail, giving listeners a glimpse into his own moods and feelings, putting paid to the assumption that he is a deeply private man.
He seemed as though he was enjoying the discussion, and hey, who was I to shush him!

During the pre-interview, we had had a quiet look at the questions. Sachin was more than happy to discuss his views on any topic, and I was even surprised that he was open to discussing his family life.
I gave him a heads up that I would ask about his teenage kids; do they for instance, like all kids, find their dad “embarrassing” at times? “Of course, Pawan, there are many times when my children find me daggy,” he said, rolling his eyes. (Alas, it was a question we never got around to in the end).
But he was keen to address the youngsters that he knew were going to be there, and get the message across about working hard to succeed. “What people see in the middle of the ground is the end product of hours of practice and perseverance, and that is what I would like to tell the young ones. No one can take anything away from you if you put in the hard work and dedication,” he said.
During dinner, he sipped his red wine and relished his seafood. He spoke about his love for Japanese food, lamenting that he had not had a chance to visit Japan yet. He regaled the table with his story of learning to assemble a watch when he was appointed brand ambassador for Audemars Piguet. He also observed that he is perhaps travelling more now than when he was playing, thanks to his ICC and other commitments. He also recalled fond memories of his childhood home, where his brother continues to live.

Talking about his kids, he noted that like any father, he is keen to see his son Arjun succeed, but he is aware that there will be high expectations from him as a cricketer, should he take up the game professionally. “All I can counsel him is to play to his own expectations, rather than those of other people,” he said.
“People will always have unreasonable expectations and it is important for you to have realistic expectations of yourself,” he shared, perhaps talking about himself.
As we got up for the Q-and-A,I suggested that he carry his glass of wine with him, as it could take some time to get through the questions. With a stern look on his face, he said, “Pawan, I promised my father that I will not publicly promote alcohol or tobacco. I know there’ll be plenty of photos taken as we talk. I think I’ll just sip on my water.”
What a fine partner to be out there with, in the middle!