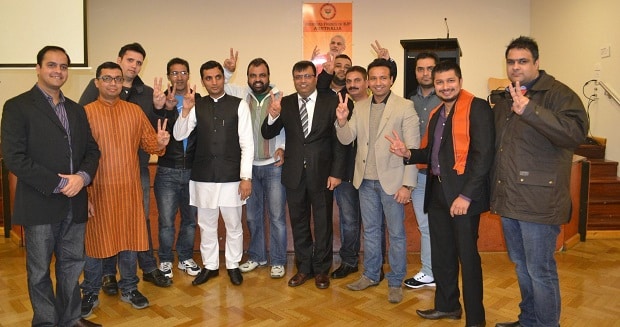 To celebrate the victory of the Bharatiya Janata Party in the recent Indian elections, chapters of the Overseas Friends of BJP (OFBJP) worldwide are organising public programs marking the unique event of Mr Narendra Modi becoming the 16th Prime Minister of India.

The South Australian chapter of the OFBJP was launched in late June at the Klemzig Primary School function centre in Adelaide.

It was a well attended event with 60 current and potential members attending, including representatives from most Indian community groups as well as the Australia India Business Council (AIBC) and South Australia India Advisory Council (SAIAC).

Speeches were focussed and specific. The SA coordinator of the OFBJP, Chirag Trivedi, welcomed everyone and committed the South Australian chapter to progressing the objectives of OFBJP and working with the South Australian Government in promoting its India engagement strategy.

National President Balesh Dhankhar presented the objectives of the OFBJP Australian chapter which he outlined for the audience.

Rahul Jethi, OFBJP Chairman, Australia, re-iterated that the Australian Chapter is dedicated to working towards projecting a positive and correct image of India and its people in the Australian and foreign media.

He said, “The OFBJP will promote the philosophy of ‘Integral Humanism’, a core objective of the organisation with a call to create a think tank of mature, experienced and intelligent individuals of Indian origin in order to utilize their expertise and wisdom to generate new ideas which could be beneficial for the Indian community in Australia and the people of India”.

Adrian Vicary, President of the Australia India Business Council, recalled his time with AIBC and its commitment to engaging with the Indian diaspora in South Australia at both a cultural and business level. He said that AIBC and SAIAC were both friends of India and that the time was now opportune to further this relationship.

The executive committee of OFBJP with other dedicated members laid the foundation of OFBJP Australia. President Balesh Dhankhar’s earnest efforts to strengthen the Indian community in Australia are coming to fruition as OFBJP Australia rapidly expands, with chapters having opened in NSW, Victoria, Queensland, and other parts of Australia.

OFBJP SA have already been active in the community, having run a massive telemarketing campaign during the last Indian election. The launch is a culmination of their work over the last 12 months.

Chirag Trivedi revealed on the occasion, “We are initiating a new campaign to secure signature protests against the perpetrators of the recent rape cases in India and ensure that the governments in Delhi and Uttar Pradesh, under the new leadership of Prime Minister Modi, hear the strong voice of the Indian diaspora in Australia”.

They are also making a concerted effort to highlight the trials of young Indian professionals in Australia, South Australia in particular, through a similar signature campaign and to submit a referendum to Premier Jay Weatherill.

For further information on the work and objectives of OFBJP or to become members, log onto http://ofbjpglobal.org/AboutUs.aspx