Of mums and daughters 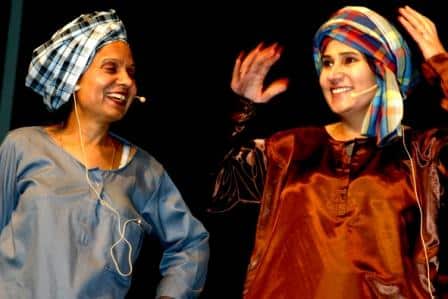 And thou shalt in thy daughter see,
this picture, once, resembled thee.
Ambrose Philips
Most mothers are the biological and emotional road maps that lead to the development of daughters. They are often looked up as role models. Those who are fortunate enough to experience this relationship also know how much fun moms and daughters can have when they are together. In celebration of that special togetherness Teeyan Melbourne Diyan Inc held a mother-daughter function at the Kingston City Hall, Moorabbin recently.

Coming into its fourth year the Teeyan event attracted a large audience and the hall was packed with colourfully attired women of all ages.  Teeyan (also known as Teej) is a traditional Indian festival held in the beginning of monsoon season. Around this time the newly married women return to their parents’ homes to celebrate and hope for happiness, prosperity and well-being. Singing and dancing is an integral part of this festival.

Teeyan in Melbourne was also celebrated with a few songs and a lot of dancing. What unfolded was a kaleidoscope of vibrant colours, stunning outfits and spirited dancing to zesty Punjabi music. By the end of the event the abundance of giddha, bhangra and similar dances started bordering on too much of a good thing. The monotony was rescued by a thought- provoking skit on social and domestic issues like alcoholism, dowry, family conflicts etc. The focus was to revive the cultural values that we have been brought up with and sustain them to maintain meaningful relationships.

A stand out performance was a tongue in cheek humorous skit by two ‘bhands’. The dialogue between two elderly men of the village (played by two very talented women) was enormously enjoyable.  The shopaholics were tempted with jewellery, clothing and shoe stalls outside the main performing area. Stalls such as Bedazzled By Rani, Riwaaz boutique and some independent operators offered a popular attraction for women who sought some retail therapy. Indian Link also participated in the event and three raffle prizes were drawn that gave the winners a voucher to enjoy dinner at Tandoori Junction restaurant in Glen Waverley. At the tag end the floor was opened up to the audience giving them a chance to move and shake to upbeat Punjabi hits.

The organising team that included Paramjit, Rajbir and Navjot had made every effort to ensure that the participants had a good time. Teeyan was a gender exclusive activity that gave the audience a chance to catch up, share a laugh, tuck into some delicious Punjabi snacks and let their hair loose on the dance floor with their gal pals. The whole event was dedicated to give the women an opportunity to take a minute for themselves while enjoying the company of other fun and fabulous friends. It mostly lived up to the expectations.