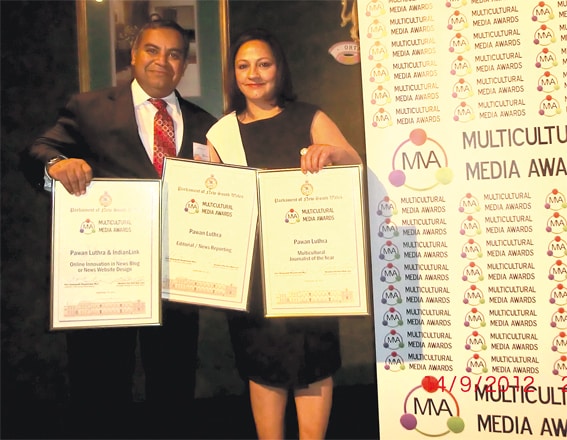 In what is clearly a significant milestone for community journalism and more importantly Indians down under, ethnic newsgroup Indian Link has bagged three of the nine awards at the inaugural Parliament of New South Wales Multicultural Media Awards.

The high-calibre media group took the top honours in the Editorials/News Reporting, Online Innovation in News, Blog or Website, and its publisher Pawan Luthra was named Multicultural Journalist of the Year.

Australia’s Foreign Minister Bob Carr presented the awards at a gala dinner on September 14. Winners in nine categories were selected from among 132 entries received from all over Australia.

Pawan Luthra shared the big one, the award for Multicultural Journalist of the Year, with Majida Abboud of SBS Radio.

Initiated by Member of Legislative Council Shaoquett Moselmane, the awards are the first of their kind in Australia.

Addressing the special invitees, Moselmane noted, “Since the first multicultural newspaper Die Deutsche Post was published from Adelaide in 1848 and first Chinese paper Guangi Huabao in 1894, ethnic media has contributed extensively to the Australian way of life.”

He added, “Today multicultural media has diversified across print, radio, web, TV, satellite and all forms of social media. There has however been no stand-alone award to recognise this substantial body of work. These papers and their pioneering journalists have passed into history with little or no recognition, no reward and no hall of fame.”

“Tonight we break that drought and celebrate the beginnings of spring for multicultural and indigenous media in Australia,” he declared. “Your ingenuity and spirit has left no stone unturned. With the capacity to bring news and events to every multicultural household like never before, your dedication is admirable.”

Speaking to this reporter, chief guest Foreign Minister Bob Carr later said, “I was proud to be a part of the first Multicultural Media Awards. It is great to see multicultural media getting the attention it deserves. I believe it is essential to Australian democracy.”
“I congratulate Indian Link for winning three Awards on the night,” he added. “Journalists representing those of Indian ancestry are ambassadors for Australia to the Indian community. By sharing cultural ideas through journalism, you are helping to create the overlap of cultures that makes up Australia’s national identity.”

ABC correspondent and one of the members of the judging panel, Liz Foschia said that she was impressed by the submissions and range of topics covered by ethnic media organisations.

“It is very important to have a strong multicultural media to inform their local communities about issues of particular concern to them, but also to cover wider events with a different perspective,” she noted.  “There were good examples of quality journalism that would not have been out of place in mainstream publications. Indian Link, in particular had made a special effort with its entries and that is reflected in the number of awards it received.”

As the only speaker on the night from amongst the award-winners, Pawan addressed the audience and spoke about the specific pressures faced by the multicultural media such as the constant struggles for funding. Yet it was his story about Indian Link Radio that touched a chord. Pawan recounted the incident from a few days ago, when a radio listener rang him to say thanks. “You’re keeping my mother alive,” the listener told Pawan. Apparently, his mother, a nursing home resident, is an avid listener, turning on the radio as soon as she wakes in the morning as her only regular means of contact with a Hindi-speaking world.

“Three awards in one night can only be a team effort,” Pawan also noted in his speech, and thanked his team, who work very hard to see that a quality product goes out every fortnight in press and every day on the airwaves. Seven full-time staff at Indian Link oversee the work of no less than sixty newspaper contributors across the country, and a dozen radio broadcasters in Sydney. Each of these individuals, Pawan feels strongly, has ownership of the awards the company has received this month.

A journalist with over two decades of experience in both Australia and India, Luthra has certainly raised the bar in community journalism, since he and his wife Rajni founded Indian Link in 1994.

Like most migrant success stories, theirs has been founded on humble beginnings. It is a truly inspirational tale born of a passion to excel and commitment to its cause.

From a small 24-page black and white newspaper to gloss-wrapped monthly editions in all major metros besides fortnightly editions in Sydney, with a print run of 44,000 copies and a readership of 200,000 per edition, a 24-hour radio station, e-paper and live website, Indian Link has grown to become not merely a trusted media house, but a forum for the community.

“Our desire was to start a community newspaper of substance, seeking out Indian links in Australian life,” explained Indian Link editor Rajni Luthra, looking back nostalgically on those start-up years. Rajni gave up a career in psychology to build the Indian Link brand.

“It was definitely not an overnight success,” she confessed. “We did everything, from content generation to delivery, by ourselves. But as the Indian community in Sydney grew, so too did the interest. With a strong focus on quality and authenticity, readers became addicted to the features, the stories of other migrants settling into life here, even the Bollywood articles. Growing in scope and influence through various forms of digital and print media, Indian Link is now a vehicle for telling the Indian story in Australia.”

Both through the flagship newspaper and diversified media portfolio, Pawan Luthra has established himself as the voice of the community not only within, but also in the mainstream. It is to his credit that he is repeatedly asked to speak on behalf of Indian Australians at mainstream gatherings and media panels, commenting on current affairs such as the uranium issue, the international student fracas and the Delhi Commonwealth Games crisis, and also on

During the 2010 Commonwealth Games, Luthra was invited by Foxtel to commentate on the opening ceremony, the first ethnic journalist to do so on mainstream TV. His insightful comments on the opulent pageant helped facilitate cross-cultural understanding.

Luthra’s contributions have been recognised not only through the Multicultural Journalist of the Year award but also for his thought stimulating editorials that have effectively bridged the gap between his country of birth and adopted land. Always in tune with the pulse of the community, his insightful and candid style of writing has a loyal readership base and is repeatedly endorsed by community elders.

Encompassing a range of current and topical issues, including local politics, health and education, state of economy, thorny India-Australia relationship and burning community issues, his powerful editorials represent the voice of reason while fearlessly confronting the hard truth.

Pawan’s notes on community affairs have been of particular interest to those observing the community from outside, including demographers, political analysts and social historians.

The award for Online Innovation is equally a well-deserved one, for Indian Link has always embraced technology wholeheartedly.

“We have been on the cutting edge of technology since our inception,” commented Luthra. “With our most recent innovation, the Indian Link Radio App for smart phones, the 24/7 Radio station has gone global. It can be downloaded free from iTunes and allows people the freedom to listen to live radio.”

“The application has already clocked over 5,500 downloads and is growing everyday. With the Indian diaspora worldwide currently estimated at over 30 million, the Australia-developed radio app has far-reaching potential,” Luthra observed.

“Listeners not only in Australia but also in New Zealand, India, US, Canada, Dubai, even Afghanistan and Korea, are enjoying our pick of Bollywood music, and participating in talk back and discussions live on air,” he added.

A ‘family’ feel has inexplicably been created out of the Indian Link Radio aura: regular listeners ‘know’ each other, without ever having physically met, as callers ring in; milestone birthdays are celebrated; old friends have found each other; get-well-soon wishes are shared at bouts of ill-health; even marriages have resulted amongst listeners. Babies have been born as expecting mums have taken the radio with them to the maternity ward (welcome, baby Om Ganwani of Melbourne), and listeners have even mourned together the loss of one of their own (RIP, Col Kler of Sydney).

“Our listeners will happily vouch for this community feeling,” Pawan said, adding, “I feel fortunate indeed to have created this forum that has connected people at such a level.”

Only last year, Luthra won the NSW Government’s Community Harmony Award for facilitating and promoting social cohesion and understanding between the communities of the Indian subcontinent and the broader NSW community.

Not those to rest on their laurels, the Luthras are already exploring new pastures to build and extend on the existing portfolio. For Indian Australians, this can only mean fresh pathways for better integration and a stronger public voice.

Multicultural Journalist of the Year

Contribution to Social Inclusion and Multiculturalism

Multicultural Photographer of the Year