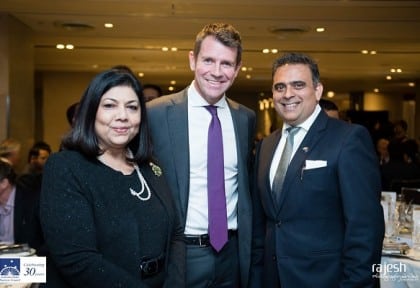 Over 300 people filled the function room at the Hilton Hotel in Sydney to hear New South Wales Premier Mike Baird articulate his vision for relations with India. While the Premier was keen to talk about the great opportunities with an emerging India, the main take away from his address was the appointment of former Premier Barry O’Farrell as a special envoy for the NSW-India relationship. Barry O’Farrell is well known to the Indian community as the first NSW leader to actually promise, and then follow through with, an annual visit to India during his short reign at the top. Since then, he has been actively involved with the Australia India Council and is a regular at Indian Australian business and trade functions. In fact, when introduced at the All Phones arena during the visit of Prime Minister Modi, he was the local who received the loudest applause from the stadium full of Indian Australians.

The AIBC NSW Australia India address is an annual event organised by the Australia India Business Council NSW. Having the Premier of the State as its keynote speaker was indeed a coup for AIBC NSW President Raja Venkateswar and his team.
The evening, though long in its speeches, gave the local business community a chance to network and get to know each other. This annual address coming a few months after the hugely successful AFR-AIBC business conference also added weight to the evening, in this, the 30th year of Australia India Business Council.
Setting the pace was a Q and A session between former cricketer, now management consultant Michael Kasprowicz and AIBC NSW Vice Chair Sameer Arora. While cricket was the common theme, Kaspa was keen to show off his business management skills. He stressed that people and businesses need to be careful about perceptions which can create impressions that might not be correct. Kaspa urged all to look at doing business with fresh eyes and not allow any preconceived notions to cloud their judgement.

Building on this, local AIBC President Raja Venkateswar urged that the growth of trade between the two countries has to be in areas other than resources.
“India will grow on internal consumption; the question is, what part of this internal consumption growth can Australia capture? India is like an elephant waking up, it just got its leverage from a charismatic Prime Minister and seems ready to commence on a march that brooks no compromise. A nation of 1.2 billion, a vibrant democracy, a $2 trillion economy that is now threatening to grow at unheard of rates,” Venkateswar prophesied.
Newly elected AIBC National Chair Sheba Nandkeolyar added to this theme and promised new initiatives to build on the business opportunities.
“AIBC will be more active on a planning and policy level. One new initiative will be to have internship programmes for Indian international students with Australian companies.” Watch out for more interesting opportunities, she promised.

A special speaker for the evening was visiting entrepreneur Tulsi Tanti from the Suzlon Group which is one of the world’s top ten wind turbine suppliers. As founder of a company which promotes green power solutions, he spoke about the responsibility we all have to safeguard our environment for future generations.
“There are also great opportunities in this space with over ten trillion dollars’ worth of investment required…Australia and India can do more in this space, with Australia having the potential to be one of the world’s greenest countries,” he said.
Taking centre stage was NSW premier Mike Baird who repeated what he has often said about the great opportunities between NSW and India.
“New South Wales has the most prosperous economy in Australia and that gives us a chance to do more. Even PM Modi agrees a growing economy allows a country or a state to take advantage of opportunities as they emerge. As Europe and the United States used to be global economic hot spots, now India is an economic growth hot spot,” Premier Baird said. “I understand the value of people and relationships, and so have appointed former Premier Barry O’Farrell as NSW special envoy to India.”

“Mr O’Farrell is the ideal candidate for this role,” the Premier told Indian Link. “He formed a close relationship with Narendra Modi well before he became Prime Minister and laid the foundations for the state’s relationships with Maharashtra and Gujarat. Mr O’Farrell is a close friend of the state’s Indian community and his experience will be invaluable as we look to develop our cultural, business and diplomatic links with India.”
In his new role as special envoy for the NSW-India relationship, serving a two-year term, Mr O’Farrell will represent NSW at key events and assist with hosting high-level business to business engagements, delegations and trade missions.
The Australia India Address is an important evening on the business calendar for India and NSW. It is a chance for furthering engagement and exchanging ideas on how to improve momentum and increase trade opportunities.