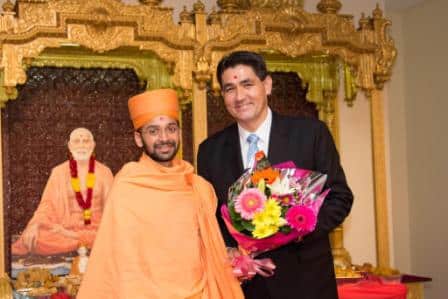 In February 2002, His Holiness Pramukh Swami Maharaj inaugurated the BAPS Shri Swaminarayan Mandir in Sydney, opening its doors to the community. Families, youth and children benefitted from the many cultural and spiritual activities on offer, and as the number of devotees grew, so did the need for a larger temple (mandir).
In 2011, an ambitious project of building a larger mandir was commenced by the community, for the community on the same hallowed premises sanctified by Pramukh Swami Maharaj at Eleanor Street in Rosehill. With the main phase of construction work coming to an end, the new mandir was opened and occupied on May 12, following a Vedic puja ceremony in the presence of BAPS sadhus, Jnanpurush Swami and Adarshmuni Swami.  An assembly was also held to thank and appreciate the efforts of devotees and well-wishers who helped in the making of this mandir.
Present at the opening of the mandir were a host of state government officials and prominent members of the Indian community. Congratulating the congregation Dr Geoff Lee, State MP for Parramatta said, “What a wonderful contribution the BAPS Mandir and the community makes to this area”.
Dr Lee, in whose electorate the mandir is located, also acknowledged the contribution that Indian migrants make to Australia, and thanked volunteers for their contribution.
“The BAPS Mandir here is the most organised group of volunteers that we have,” he added.
Also present among the guests were Mr John Chedid, Lord Mayor of Parramatta who echoed Dr Lee’s sentiments, and Mr Peter Wood, Principal of Rosehill Public School, where Sunday Satsang assemblies were held during the reconstruction phase of the mandir. Reciprocating devotees’ feelings of goodwill towards the school, Mr Wood said, “I want to congratulate you on this fantastic facility for our local community, because we are all here servicing our local community and working together, and can I say we’ve had a great partnership”.
The mandir features a prayer hall, dining area and activity rooms for children and youth. This new complex will now be used to celebrate major Hindu festivals and accommodate a range of social and spiritual activities. The Mandir Murti Pratishtha (idol installation) ceremony is expected to take place in early 2014.