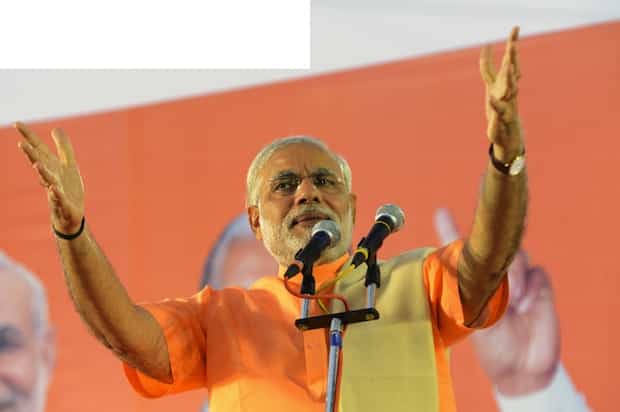 “I believe God has chosen me,” said Narendra Modi during the election campaign that catapulted the Gujarat chief minister to the very pinnacle of power as the next prime minister of India.

His words sounded prophetic on Friday in mid-Mayas the Bharatiya Janata Party won an absolute majority on its own, securing a record number of 282 seats in the Lok Sabha, and in the process reducing the Congress to its lowest number in the house.

It has been an extraordinary journey for the man, an outlier, who does not belong to any of the country’s enduring political dynasties or to the socio-cultural elite. He has been branded as a “Hindutva hardliner”, a “divisive, polarising figure”, especially because of the 2002 riots under his own rule in his home state. Modi has in a way taken sweet revenge as he savours the phenomenal poll results, his own glory and the finest-ever performance of the BJP in more than three decades of its existence.

At the height of a gruelling campaign, Modi had said in an interview that he sensed a very strong anti-incumbency wave against the 10-year Congress rule, marked by massive corruption and seemingly dysfunctional government.

As he travelled across this country of sub-continental size and bewildering diversity, he saw “an equally strong wave for the BJP and its NDA partners,” a yearning for change, for a “stable,” performing government in New Delhi.

To a large extent, his own carefully crafted image of a “strong and decisive” leader found resonance across the country and has no doubt played a role that is reflected in the poll results. In the 13 years he has been at the helm of affairs in Gujarat, Modi has built an image of a leader who delivers, someone who is interested in results.

In the last few years, when the Manmohan Singh government was ridiculed for being caught in a “policy paralysis,” Modi seized the opportunity and conveyed a vision of decisive government and development. And this he made the main plank of his electoral campaign that touched a chord, an instant connection, especially with the young, first- time voters and the country’s burgeoning middle class.

“[Modi] functions like a modern day CEO laying emphasis on the outcome and often allegedly putting the rules and normal norms in the backburner,” said one of his biographers Nirendra Dev.

This was facilitated by an aggressive use of technology and media, and well supported by the Sangh Parivar whose members pressed its cadres to canvass for the BJP.

In contrast, the campaign of the Congress led by its undeclared prime ministerial nominee, vice president Rahul Gandhi, was uninspiring.

Opposition leaders and independent observers, however, say that though Modi talked about development, the party indulged in some social engineering in states like Uttar Pradesh, and played the backward caste and communal cards.

But there are specific and deep social changes that seem to have helped the so-called Modi wave.

Increased urbanisation, inter-regional migration and spread of communication have bridged the rural-urban divide in voting behaviour. In fact, economic shifts and greater connectivity are creating a new kind of constituency, one that is neither classically urban nor rural, but a hybrid “rurban”.

According to demographer Sonalde Desai, though India has not become a non-agricultural country, farming has increasingly become a part-time job.

Recent surveys have shown greater divergence between states than between villages and cities.

Modi has been tapping into what he calls a “neo-middle class” made up of newcomers to the urban economy. The country’s travel from a state-run economy to one run more by private capital has led to a situation where aspirations are rising a lot faster than improvements on the ground.

A master strategist, Modi also saw to it that the Bharatiya Janata Party, which traditionally appealed to the urban middle class, this time moved into rural and semi-urban areas, and tapped especially youth.