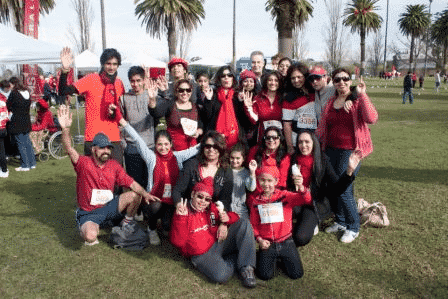 A typical winter morning with blustery wind, intermittent showers and limited visibility did not deter Melbournians from participating in the MS Fun Run 2012 held recently, to raise funds for sufferers of multiple sclerosis. In fact this year the turnout was more than that in 2011, as nearly 6000 people wearing red pounded the pavement in Albert Park on June 3.

The atmosphere was buzzing like a carnival as the Fun Run lived up to its name, generating great enthusiasm amongst the participants. The aroma of sizzling sausages and freshly brewed coffee promised a warm welcome after the run.  Some of my better-organized friends had even managed to pack some food and drinks with the intention of having a picnic later.

Humankind in all its variety flocked to the event. There were the imaginative ones with interesting team slogans, the fun-loving ones in red costumes and red hair, the motivated ones who did the 10km run or the 10km walk, and the social ones who made friends and influenced people even as they walked. There were families with kids in strollers and grandparents, or MS sufferers in wheelchairs.

As part of the MS (More Smiles team) I arrived at Albert Park with camera, runners, red T, banner et al. Simply watching the sea of red from far warmed up the adrenaline. By the time I caught up with my team and pinned my registration number on, the adrenaline was revved up to tango to my steps.

Accompanied by friends and family, I joined the crowd as it started walking en masse, around the scenic track near Albert Lake. The swans seemed unperturbed with all the human interference as they went about their daily routine without flapping a wing.  Along with the breathtaking views of Melbourne’s city skyline, some roving entertainers kept the walkers engaged.

Only fifteen minutes into the walk and I warmed up not just with the exercise, but with the warm feeling associated with being able to contribute in a small way towards a great cause.  Others in my team echoed my sentiments. The More Smiles team managed to surpass its team goal to contribute over $2000 towards the fundraiser.

The MS Fun Run is an annual event held by MS Australia in Sydney, Melbourne and Canberra. Multiple Sclerosis is a neurological condition that affects the central nervous system of young adults. A cure is yet to be found; however the funds raised are utilized to provide facilities and support to people suffering from this debilitating disease.

This year the aim was to be able to raise $1.1 million for people affected by MS. At last count, the event had already raised $1,206,316. I believe that increasing our capacity to give, be it time, money or effort, is the most worthwhile practice in our personal development. Research shows that being generous makes us happy. It also helps others and builds great communities.

I have long forgotten the aches and pains that I experienced after the walk, but I still remember the warmth of red and the joy of giving.