MIQ: Best of the best 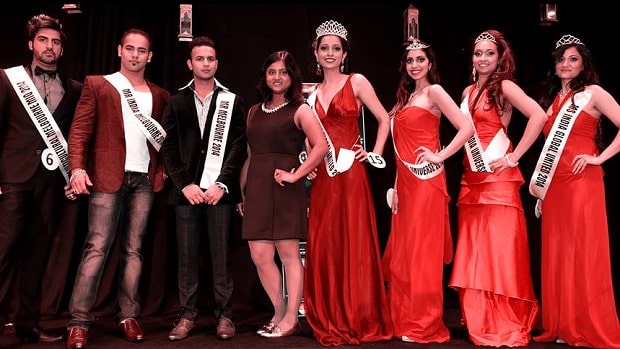 Reading Time: 4 minutesExcited winners were chosen from a bevy of beautiful people at the MIQ 2014 event, reports NEHA JAIN

It has always been my childhood dream to walk the ramp dressed to the nines, with photographers clicking away. By participating in the recently held Miss, Mrs, Mr India Melbourne quest (MIQ) 2014 event, I realised my dream and it is an experience I will always cherish.

MIQ 2014 is an annual pageant hosted by Anamika Sri of Charismix events, who also coordinated the preparation sessions that included fitness training, choreography, public speaking and photoshoots. The final event was held at Village Green Hotel in Mulgrave.

On the day of the event, there was a flurry of excitement in the green room while the contestants got make-up and hair done for our big moment. We had all worked very hard and everyone was enthusiastic about finally getting an opportunity to showcase their beautiful clothes, whilst strutting down the ramp.

When called, I walked on stage in a beautifully designed saree by Niket and Jainee and in the Q&A round I was asked: “What would you do if you only had 5 minutes to live?” I replied saying, “They say that you should live each day as if it is your last, and if I only had five minutes to live, I would spend it with the most important people in my life, my family and ensure that each of the five minutes was spent making memories and being happy”. I walked away feeling like a winner to thunderous applause from the audience. All the contestants performed well, walking the ramp successfully and answering the questions with confidence.

Next, the contestants walked the ramp draped in ethnic wear from Salwar Point and Royal Sarees.  Pooja (Ms Beautiful Skin MIQ 2014) looked stunning in a red Anarkali suit and walked the ramp with panache. The last round was evening wear, with female contestants dressed in red gowns from Leiela and male contestants in suits from Envoy London.  Everyone felt and looked like a million dollars in their creative designer outfits, including Merry (Ms Fitness MIQ 2014). It was a night full of glitz and glamour for the contestants and the appreciative audience.

Finally the results were announced. Everyone had done a great job and there was a definite air of anticipation but as is the case in all competitions, not everyone can be a winner.  The MIQ 2014 winners in the ‘Miss/Ms’ category were Ms Sheetal Chail (Miss India Global United 2014) and Ms Shagoon Bhasin (Ms India Global United 2014), who will both be travelling to Minnesota to participate in the international pageant. “I feel great! I am very happy that I won this title. I worked really hard in the last few months and it has certainly paid off. My future goal is to change society’s perspective on Indian woman. I want to encourage every single female to love and believe in themselves, as this will result in internal happiness and confidence – and then the sky is truly the limit (for them)”, said Ms Sheetal, smiling enthusiastically.

The ‘Mrs’ category winners were Mrs Ashleen Dhamija (Mrs India Universe) and Mrs Francesca McMillan (Mrs Australia Universe), who will both be travelling to Kuala Lumpur to take part in the international pageant. This year, MIQ 2014 also introduced ‘Male’ categories and the winners were: Mr Rohit Dhillon (Mr Multicultural Melbourne (Australasia); Mr Simran Sethi (Mr Indian Melbourne); and Mr Aakash Yuvraaj (Mr Melbourne). “It’s been a great learning curve for me, I worked hard in each session to prove my worth and people have appreciated that. I have also gained a lot of confidence and made many new friends. I also believe that the event could have been better organised, but overall it has been a great way to showcase my talent. Congratulations to all the winners”, said Aakash on being crowned with the title.

The audience enjoyed entertainment in the form of dances and songs from talented local artists between rounds. Anamika thanked the exhaustive list of sponsors for their ongoing support and generosity. She also commended MCs for the evening, Kritika Srivastava and Mukul Relan.

The guest of honour and exclusive fashion designer of the evening was JN Collection (Niket and Jainee Mishra). According to designers from India: “JN’s clothes represent modern India, which has grown with our rich heritage and culture, and has also welcomed the beauty of other worlds”. JN’s is a tag that carries with it the warmth of tradition. Their designers specialize in a cosmopolitan look but don’t shy away from experimentation, reaching out to the world with their creations. “The JN look is all about gusto with the right twang of feminine flirtatiousness”, claimed Jainee Mishra.

The most difficult job for the evening however, was that of the judges who had a tough job choosing from so many eager and able contestants.  The judging panel including Aloke Kumar, businessman and owner of Thornbury Theatre; Bindy Rayat, model and entrepreneur; Mary Bernadette, former Miss Bombay and dance school director; and Lucy Laurita, director of the fashion brand Leiela.