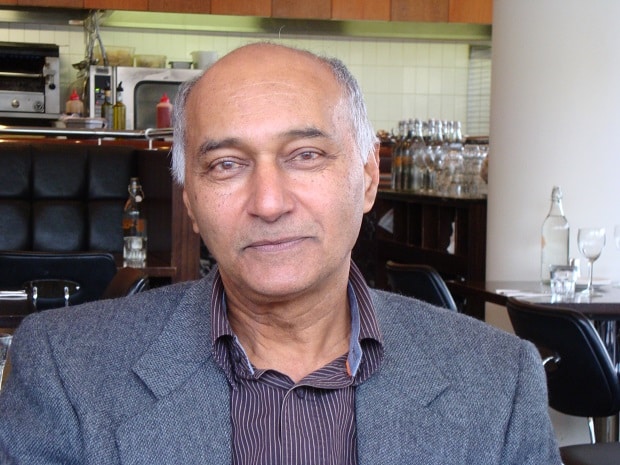 Ravi Sood was born in Nairobi, Kenya, and obtained his BSc from Makerere College in Uganda. He completed his PhD in Astrophysics from Imperial College, London, studying the emission of high energy gamma rays from the sun and from our Milky Way galaxy, using instruments flown on balloons at high altitude from locations in four continents. In 1975, Ravi was shortlisted to work in space on the Space Shuttle as a payload specialist, but failed the rigorous medical examination due to his colour blindness.
In 1979, he took up a lecturing position at the Royal Australian Air Force Academy, University of Melbourne, where he continued his astrophysics research using stratospheric balloons, branching into the fields of cosmic radiation and X-ray astronomy. He joined the Australian Defence Force Academy, University of NSW in1986 as a senior lecturer, where he established the High Energy Astrophysics Research Group in the School of Physics. In 1992, Ravi was promoted to Associate Professor and was the Head of the School of Physics from 1995 to 2002.
Today, Ravi is the leading expert in stratospheric scientific ballooning in Australia. He is the Station Director of the Balloon Launching Station, Alice Springs. Currently, this is the only stratospheric balloon operations facility in Australia. Ravi has published over 120 research papers in scientific journals. The launch of stratospheric balloons is carried out from a runway at Alice Springs airport that is closed to other air traffic operations. “To inflate balloons,” says Ravi, “instead of hydrogen, helium gas is used as the extremely dry air of the zone can generate hazardous electrostatic discharges during inflation”. Balloons with a volume of up to 45 million cubic feet, carrying payloads weighting up to 2 tons have been launched from Alice Springs. The tracking of these balloons in flight is conducted via radio links, and visually by small aircraft during the descent phase.
Ravi has taught Physics at the undergraduate degree in Australia for three decades, and has also supervised several PhD and MSc students. He led the complete updating of the Physics curriculum at UNSW@ADFA to provide a degree which stands approved by the Australian Institute of Physics that is relevant to officer cadets of the Australian Defence Force. He was awarded the UNSW@ADFA Teaching Award for Excellence in 2000. Ravi has taught Astronomy and Astrophysics at all undergraduate levels, and has put together innovative courses in Cosmology, and Navigation and Guidance Physics. He has led the development and delivery of a highly successful course on ionising radiation safety for the Australian Defence Force.
Recently, Ravi has led the development of a postgraduate course in Fundamentals and Management of Weapons of Mass Destruction. This course was specifically designed for officers of the Australian Defence Force.