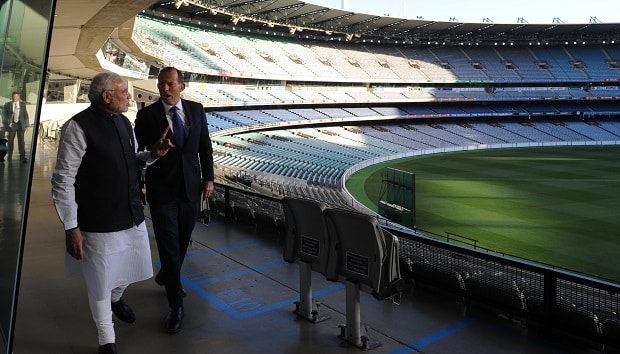 After a full day of activities – addressing the Australian parliament, meeting with business leaders – the popular Indian Prime Minister Narendra Modi was whisked to the hallowed grounds of the iconic 161-year-old Melbourne Cricket Ground (MCG).

There he was joined by Australian Prime Minister Tony Abbott as well as cricketing legends from both India and Australia, including Sunil Gavaskar, Kapil Dev and V.V.S. Laxman, Steve Waugh, Glenn McGrath and Alan Border, for a tour of the turf.

“A successful India will be a vast opportunity and a force of good for the world. We look forward to closer partnership with friends like Australia,” Modi said at the dinner.
“India is experiencing urbanisation at a rapid pace. Studies suggest that by 2031, 11 per cent of the world’s urban population might be in Indian cities.”

He added that India already has more than 50 cities with a population of over one million. “Urbanisation can be an enormous opportunity,” Prime Minister Modi said.

He spoke of his plans to build 100 smart cities, revive heritage cities, build modern solid waste management and waste water treatment systems in 500 cities, and clean up the country’s rivers.

“This is part of our larger vision of a sustainable future for our country, and transforming the quality of life of our people in cities and villages alike,” the Prime Minister said.

He hoped that India could learn from Australia’s experience and benefit from its expertise and noted that Melbourne is regarded as the best city in the world to live in.

Modi said he wanted to build a future in which every Indian can say that his life has improved and his environment has become better.

“I am confident that we will achieve it with the support of the people of India, and through the talent and energy of 800 million youth, below the age of 35 years,” he said.

“(It is) a generation that is eager for change and committed to work for it,” the Prime Minister added.

Modi also stressed on the importance of relationships between people.

“One thing we all agree on. The bonds between the countries are made strong by the joined hands of our people.”

The Prime Minister also spoke about the love for cricket that both India and Australia share. “No business is serious enough to keep an Australian and an Indian from discussing this great game,” he said.

He recounted India’s glorious cricket triumph at the MCG in the Champions Trophy in 1985 and said that the Ground would be a deserving venue for the final of the Cricket World Cup in 2015.

“I hope that our two teams will play that match,” Modi said.

The Prime Minister also said that India can learn from Australia’s famous sporting skills in other areas too. “We have decided to collaborate on a sports university in India,” he revealed

“Our exchanges in sports, tourism, education and culture are great sources of strength for our relationship,” he stated.
The Prime Minister thanked his Australian counterpart Tony Abbott for being “truly generous with your hospitality and warmth”.

PM Modi concluded, “My memorable visit to Australia ends tonight, but a new journey of our relationship has begun.”