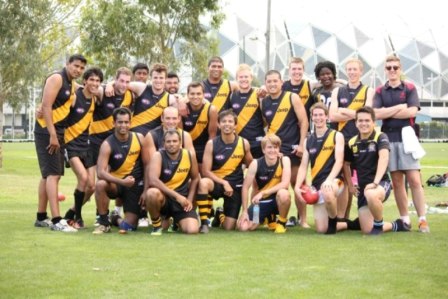 It’s atypical to come across Indians being part of an Aussie Rules Football team and if it comes with an Indian name, the flavour is only accentuated. Masala FC (MFC) is a multicultural community team currently participating in the XVIII club competition organised by the Victorian Amateur Football Association.
I chatted with Trevor Banerjee, Operations Manager of MFC who works as a business and professional development coach in Melbourne. Trevor has a very positive outlook on life with loads of vigour and purpose, as was apparent in our conversation.
Having arrived in Australia ten years ago as an international student, Trevor instantly embraced Aussie football, but at the time played the sport primarily for leisure. “Opportunities for sport are very good in this country and I loved the fact that Aussie Rules Football offered me a platform to connect with the community,” he states.
Masala FC is a club that came into existence in 2012 thanks to the Indian contingent that competed in the 2011 AFL International Cup in Melbourne, a tournament for non-Australian migrants, of which Trevor was a part. However, he gives credit to club president Ash Nugent, who is Australian, for coming up with the idea of forming a multicultural team. Trevor adds, “Ash and myself hit it off quite well in 2011 and when he came up with the idea of forming an AFL team I thought it was brilliant. I looked at it as an opportunity to integrate within the community and therefore, got actively involved with administering the club.”
As for the title Masala FC, Trevor says, “Being a multicultural team we wanted a name that could encapsulate a mixture of communities and what better name than ‘Masala’!”
When the club was in its infancy, it was decided to form a multicultural team in order to include players from various backgrounds, and not limit selection to just those from the subcontinent. “The mission of our club is ‘More than a football club, we are a social hub’,” sums up Trevor neatly.
AFL team Richmond FC, a fervent advocate of promoting the sport within the Indian community must be applauded for once again playing an influential role in organising training equipment and players’ kits for MFC.
As of now the team is composed of eight Indians, five Sri Lankans, one each from Zimbabwe and Afghanistan and ten Australians, but Trevor says the club is on the lookout for more players. “Sport offers a wonderful medium for people to assimilate within the community and the fact that we have welcomed two asylum seekers to be involved just goes to show how Aussie Rules helps one fit in. Moreover, we need more players and experience is not mandatory at all,” he adds.
On what Australians think about MFC, Trevor says, “Some Australians have this impression of migrant communities forming their own ghettos, completely refraining from assimilating within the community. Now I can tell them that we have an AFL team, so how much more integration do you need?”
As much as Australia wants the AFL to go global, there are some sections in society who haven’t yet come to terms with people from other backgrounds playing the game as has been evident in recent times both on and off the field, with racial abuse being hurled towards players both at home and overseas. On this sensitive issue, Trevor vehemently comments, “We’ve only had support so far from the community. When I tell an Australian that I’m a part of an AFL team, there’s a sparkle in their eye which is priceless.”
MFC is here to stay and as a club, they have some realistic and ambitious goals set. They hope to form a multicultural women’s team next year along with an Aussie Kick team for children and more importantly, they want to take the game to India for which the groundwork has already commenced. “We have contacts in India who have begun to organise coaching clinics for children in West Bengal, Kerala, Maharashtra and Gujarat. In the future we also hope to organise a few friendly fixtures in different parts of India to popularise the game further,” Trevor explains.
If you’d like to be part of MFC, visit www.masalafc.com.au for further details.