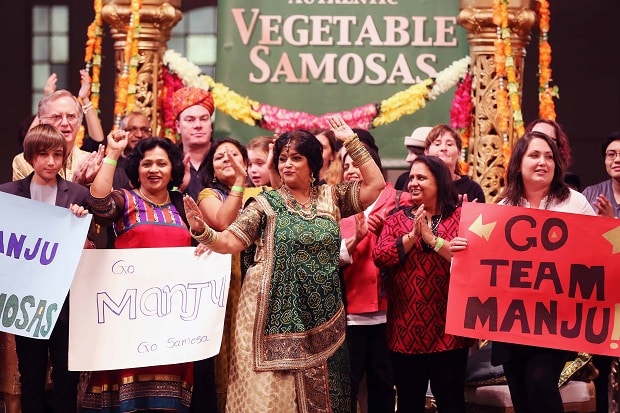 Reading Time: 3 minutesManju orchestrates her ingredients into the finale of Recipes to Riches

“Think Manju, think samosas!” shouted an enthusiastic Manju Jehu as she reached out to us through our television screens from the sets of the recently concluded Recipe to Riches series aired on channel Ten.
The show was a twelve part series where Australians brought to the table their homemade recipes, and the winner of each episode saw their products on the shelves of Woolworths across Australia the day after the episode was aired.
Brisbane-based Manju who has been a radio convenor for over 26 years and who currently is the Honorary Ambassador of City of Ipswich for India, made it to the finale of the show for her product, Manju’s Vegetable Samosas. Indian Link caught up with Indian-born Manju to find out more about her experiences on Recipe to Riches and her love for cooking a particular samosa which impressed not only the judges, but also the rest of Australia.
“Anything I do is out of sheer love and passion, and the same holds true for cooking,” says Manju passionately, but with a smile. “Cooking is like music to me, I am the director and I have to orchestrate ingredients accordingly to create a dish. I can create food out of anything”.
However, this did not hold true when Manju first moved to Australia in the late 70s. “I did not know how to cook when I first got to Australia,” she says with a laugh. “The only dish I knew was spiced potato curry and this was because of a photographic memory of sitting long hours in my kitchen in India waiting for the food to be cooked and served to me by my mother,” she adds. “Spiced potatoes between toasted bread was like a samosa to me then”.
It was not until 1982, when a health shop Manju was browsing through made her an offer to deliver a dozen samosa for $6. “I remembered talking to God and asking Him how this would be possible. And the answer I got was ‘Do unto me and I’ll bless you’,” she reveals. This was the beginning of her learning process of making a samosa. Manju remembers that her first batch was with flaky pastry. “I got better at making the dough for the samosa, and my samosas were sold in few shops within my area,” reminisces Manju. “I was unaware that I had started a catering business of sorts, which went on for ten years”.
She continued to make samosas for her friends, get-togethers and family friend Greg Chappel, former Australian cricketer who is a big fan of Manju’s homemade samosas.
“I came across the application for Recipe to Riches and filling in the form was the most difficult part. I told myself I would give it a go and see what happens next,” states Manju who shared her homemade samosa recipe along with a photograph of the finished product.
Manju eventually got a nod from the judges for her samosas and received the Golden Ticket, an entry to the competition.
Up against other homemade recipes, Manju was asked to produce a large number of samosas in a commercial kitchen. Having never worked in a kitchen of this magnitude, the task ahead seemed daunting. But “with a focussed, confident and positive attitude I went ahead and prepared the samosas,” she says.
After getting a go-ahead from the judges, Manju was then asked to market her product to Australians. “During this section I felt very disheartened and thought this journey was finished, but it was my daughter Tabitha who offered me words of encouragement and this kept me going,” she reveals.
Manju’s samosas were a hit among the locals and she was announced the winner of that particular episode, with her samosas made available on the shelves of Woolworths. “It was a dream come true to see my samosas in the frozen section,” says Manju. She qualified to participate in the finale with ten other contestants, each vying for a life-changing partnership with Woolworths.
“Being in the grand finale of Recipe to Riches I was a little shaken up, I had to pinch myself to tell me that this is not a dream anymore, but a reality,” says Manju with a smile. Manju’s vegetable samosas did not win in the finale, but this has left her stronger and more optimistic about her personal culinary goals.
Her own cooking show someday which will showcase both Indian and multicultural cuisine, and the production of a range of frozen food products, are what Manju aspires to and hopes to achieve in the future.