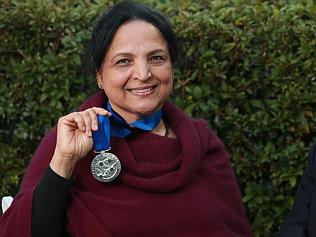 I had heard of Mallika Prasad-Chowta through common friends and relatives before we moved to Adelaide. We contacted her when we were moving and when she heard that our furniture would arrive a couple of days later, she and her family put us up for those few days in her lovely home. Ever since, I have been very proud to say I know her!

But I only came to know a lot more about her a few weeks ago when I read in the papers that she had won the Pride of Australia Medal. And proud we certainly should be of Mallika and her achievements.

Mallika Prasad-Chowta is well regarded for her dedicated work both in the community and in her professional circles. In recognition of her close to 40 years of services, especially for the community and multiculturalism, she was awarded the Pride of Australia Medal 2014 in the Fair Go category for South Australia.

Originally from Konibail House near Mangalore in India, Mallika migrated to Australia in 1975 with her husband Dr Raj Prasad, and has called Adelaide home since.

Mallika’s first job was working with the Aboriginal community as low cost nutritional cookery demonstrator. She visited families for 16 years across the metropolitan area, as well as in fringe locations, on a weekly basis to cook meals with families. Mallika considers this as her proudest achievement. As the late Laurie Bryan, founder of the Aboriginal Education Foundation once wrote, “The program received unprecedented interest and involvement.”

On receiving the Pride of Australia Medal Mallika acknowledged that her husband and three sons’ cooperation was fundamental for her community and professional involvement and achievements. “I was fortunate to be involved in so many different community activities,” she said. “Getting a medal on top of that is overwhelming. I feel humbled.”

In addition to working with Aboriginal communities, Mallika also worked with children with disabilities. She qualified as a Special Education teacher and taught in a number of metropolitan schools. Later she became a tutor at the SA Head Injury Services to assist secondary and tertiary students with head injuries.

A keen supporter of the performing arts since childhood, Mallika served on the management boards of Nexus Multicultural Arts Centre and Community Arts Network. Throughout the 1980s, she was also the program coordinator for the Indian community radio program on 5EBI FM. She sings beautifully in the Hindustani style and, in earlier years, was involved in Indian dance and theatre too.

Avid arts enthusiasts, in the early ‘80s Mallika and Raj founded Rasik Ranjani Inc (an association of Indian music lovers) andcoordinated its activities for the first four years. A few years later, Mallika became the President of this association and organised quarterly music programs and annual festivals featuring a variety of music of the sub-continent.

Professionally, after completing her post-graduate degree in Arts Administration in 1993, Mallika served as the Manager of Cultural Diversity Services at the State Library of SA for eight years. “This job was the highlight of my career and it gave me opportunities beyond my imagination,” Mallika said. One colleague described her as a ‘legend’.

Mallika represented the Indian community on Multicultural Education Committee, an advisory body to the Minister for Education, from 1995 to 2000. She was the leader on two very significant projects for the Committee, developing a multicultural education resource guide for teachers and developing Countering Racism through Developing Cultural Understanding, involving over 4000 students from 34 schools and over 100 teachers.

On another front, after serving as a committee member, cultural secretary and secretary, in 2003 Mallika as elected President of the Indian Australian Association of SA. One of Mallika’s most significant communitycontributions was bringing the Mela to Elder Park in the centre of the city, opening it up to the larger South Australian community. She also made it a day and night festival, had different stages for different types of performances and made the event financially sustainable by charging entry fees.

Mallika was also the secretary of the Hindu Society of SA during 1997-99 when the plan for the Ganesha temple redevelopment was finalised and approved by the Council. Since then she has secured a number of grants for the temple’s building projects.

After completing her MBA, Mallika had a brief stint at private consulting in the early 2000s. “My exciting achievement was designing and running creative idea generation workshops,” she said.

Continuing with her love of helping others, and her interests in education and youth services, Mallika held many positions in the South Australian government. This included being principal coordinator of refugee services for the Department of Families and Communities.

Never one to sit idle, Mallika is closely involved with the Indian community. Recently though she has been scaling down her community involvement, choosing instead to engage in creative interests like singing, painting, idea consulting.  She’s on the lookout for opportunities for sharing her experiences for the benefit of another worthy social cause.