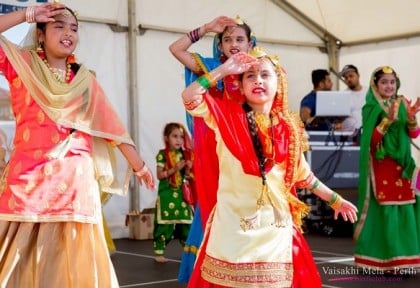 Put a bunch of Punjabis together anywhere in the world, it is said, and they will create a mini Punjab of their own. Locales may change, and along with them, traditions and customs, but the essence of cultural heritage continue to be passed on to new generations.

It was in this spirit that the Punjabis of Perth, under the aegis of the Sikh Association of Western Australia (SAWA), celebrated Baiskahi recently with their Baisakhi Mela Perth.
The venue, Sir James Mitchell Park on the South Perth foreshore was spacious and family friendly, even though a few attendees claimed to have had difficulty in reaching the location. But it was a wonderful dose of good old fashioned Punjabi bonhomie that greeted them as they got there.

The welcome stall provided a wealth of information about Sikh history and culture. Living away from the homeland and doing your every bit to assimilate into a new culture, sometimes it is good to get a refresher into your own heritage and how it has evolved in modern times.

When was the last time you thought about why all Sikhs are called Singhs? Or why all our women are Kaurs? Or, more deeply, about the lineage of the Sikh gurus, or the compilation of the Holy Granth? And, perhaps more significantly to us as Australians, how much do we all know about Australian Sikh history?

I for one, was happy on this occasion to learn more about Sikh martyr Manmohan Singh, an Indian pilot with the British Air Force trained in England. During World War II, he commanded a Sunderland flying boat and later, promoted to flying officer, was given the command of a Catalina flying boat. It arrived at Broome in WA on 3 March 1942. Manmohan Singh and his company were attacked and destroyed by Japanese air attack. Singh is commemorated at the Broome Memorial and has not been forgotten by Australia, his final resting place.

Meanwhile, back at the Baisakhi Fair, there were plenty of activities around and stalls to explore from 11am to 7 pm, which is a rare thing to see in Perth. Community sporting clubs and cultural clubs made themselves known to the public.

The glorious Jatts and Jattis looked glamorous in their kurtas and pagg, salwar kameez and phulkaris.

The stage shows included solo singing as well as multicultural performances too. Wonderful to listen to people sing their hearts out on the stage, in front of a huge and appreciative audience. These events ensure that no talent remains hidden!

To the delight of the shoppers, kurte pajame were on sale at some great prices! Kids were occupied in their electric ride on twin motor car while some were engaged in delightful barfi tasting.
The event was supported by PCSC, Punjabi Sath, WA Hockey Club, Sikh Youth Australia, ASHA, Banga Social Club Perth and ISWA.

Gurdarshan Singh Kailley, President of SAWA, addressed the gathering with feeling. The President of the Virsa Club acknowledged a beautiful message on 350th birth anniversary of the 10th guru, Guru Gobind Singh Ji: “Recognise the whole human race as one”. (Baisakhi marks not only the ripening of the rabi harvest but also the foundation of the “Khalsa Panth” in 1699.)
Magnificent and colourful, Perth’s celebration of Baisakhi held true to the spirit of Punjab.