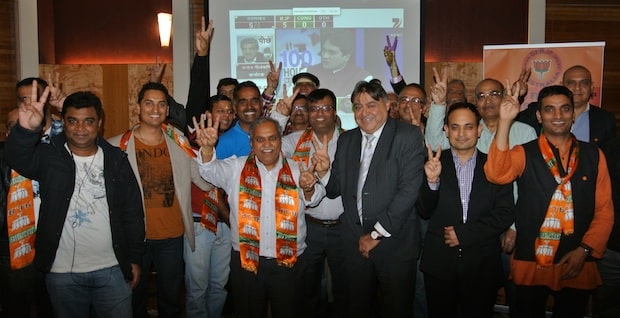 Some 200 people gathered at Burwood Club on May 16 to watch the elections results from India come in. They broke out in cheers every so often as the lotus bloomed and the Congress wilted (some even chanting the Har Har Mahadev slogan), and passed the laddoos around.

They were assembled there at the behest of the fledgling organisation Overseas Friends of BJP (OFBJP), which organised similar events in Melbourne, Brisbane and Adelaide.

The message went out via the organisation’s Facebook page days before, asking people to join in for a “Vijai Diwas” (victory day).

Were they so sure of a victory?

“Yes, most definitely!” an exuberant Rahul Jethi, convener of the OFBJP, told Indian Link. “I had been in India recently and had some assessment of the ground realities over there, and the general mood of the people”.

Jethi was motivated by a social media campaign started in the US but aimed at the Indian populace, urging them to come out in droves vote in the 2014 elections.

Amongst the people who attended were members of the Liberal Friends of India, NSW Member for Granville Tony Issa, Councillor Gurdip Singh, and the Hindu Council of Australia’s Nihal Agar and Sanjeev Bhakri.

Yet Jethi reveals that other than these handful community stalwarts, more than half the attendees were not even known to him.

“It was transformational for us as an organisation too, to see that we had reached out to so many regular folk. They were people who believed that change is required in contemporary India, and who in some way, shape or form, support the BJP ideology. They came after work on the Friday night, helped share the laddoos around, and afterwards, shook some booty!”

The OFBJP was formed in March last year.

“I’ve been a follower of the Bharatiya Janata Party since high school,” Jethi revealed, “and have been particularly motivated by the groundswell taking place recently seeking a change. Party headquarters in India gave the nod last year, and we had a soft launch in September with the opening of three chapters in Sydney, Melbourne and Brisbane”.

When senior leader Venkiah Naidu was on a private visit here in December, they took the opportunity to make a formal launch.

But the group has been active since early last year, with monthly events such as Google hangouts with Narendra Modi, Subrahmaniam Swamy and Sushma Swaraj, and Chai pe Charcha sessions.

After the elections results stunned the world, it’s been nothing short of Modi mania for friends of BJP all over the world, as they take to social media making much of incidents such as Modi’s blessings from his aged mum, his crazy cavalcade through the streets of Delhi, his thank-you visit to Varanasi where he prayed at the banks of the Ganges, and his bowing down in obeisance at the steps of Parliament House. The utterances of the prime minister-elect, such as “I am a prime worker of the people,” are being touted as pearls of wisdom. Meanwhile the smart one-liners about the decimated Congress party continue on unabated.

Buoyed by the election results, the OFBJP are seeing a major role for themselves at the community level here, as well as in the mainstream. Going forward, the organisation claims its agenda is to play a constructive role in enhancing the India-Australia relationship.

“We are Australian citizens first, but want to do our bit to increase people-to-people contact between India and Australia as well as trade and polity. To do this, we hope to be engaging with both sides of the political divide here in Australia”.

Jethi laments that the community sentiment is not adequately represented in the political arena.

“The existing organisations stop short at being cultural organisations, with no political agenda. Our organisation has very definitive political aims. We hope, for instance, to take delegations to India to help achieve these aims”.

No doubt a visit by Prime Minister Modi will be a major highlight. Prime Minister Abbott has invited his Indian counterpart for the G-20 summit in Brisbane later this year, and should Modi take it up, it will be a momentous trip not only for OFBJP but the Indian community at large.

For more on OFBJP, visit www.ofbjp.org.au