Little girl with the big heart 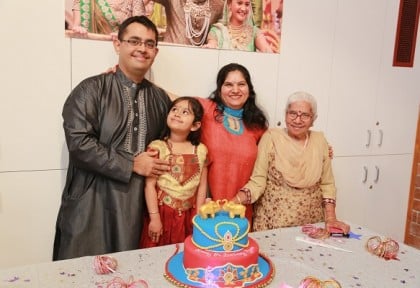 This is the story of Ryka Gulati, who at five years of age, has proven to be a big miracle for such a little girl. She valiantly fought a three-year battle with Leukemia and on her birthday recently, asked people to donate to the hospital instead of buying her gifts. Ryka and her family raised over $6000 for the Royal Children Hospital Foundation.
It was a dream fulfilled for Moonee Ponds couple Vandana and Pankaj Gulati when they were blessed with a little girl who they named Ryka (born of prayers). Pankaj and Vandana are currently lecturers at Endeavour College of Natural Health and part time researchers at Swinburne University of Technology.

A family holiday to India in 2013, however, turned into a nightmare when Ryka got sick and was diagnosed with acute lymphoblastic leukemia.
“I remember it was New Year’s Eve and the whole world was celebrating whilst we were reeling with shock and disbelief at Ryka’s diagnosis,” Vandana recounted to Indian Link.
With their lives shattered, the parents returned to Australia and started treatment for Ryka at the Royal Children’s Hospital in Melbourne. Thus started endless trips and admissions into hospital for procedures and treatment.
After nearly three years of treatment, Ryka could finally look forward to her first chemo free birthday this year. Her parents offered her a few ideas and she was quick to grab the opportunity to raise funds for the hospital that was ‘home’ for so long.
“I thought Ryka would change her mind and expect gifts instead on her fifth birthday and first chemo free celebration, however she was determined to do something for other sick kids in the hospital,” said proud mum Vandana.

The Gulatis requested all their guests, prior to the party, to not bring gifts but offer donations to the RCH in donation envelopes or through the Everyday Hero link for Royal Children’s Hospital.
Ryka distributed the envelopes provided by RCH during her party and while collecting the envelopes back, she gave the guests one envelope with a token of love bookmark that said ‘God bless you’ which she made herself.
Touched by Ryka’s selfless gesture, the donations came from everywhere including $500 from her childcare Bambini Early Learning Centre in Parkville. With great support from her parents, family and friends, Ryka’s birthday turned into a cause for celebration and giving.
According to Vandana, Ryka wished for two things for her birthday i.e. donations instead of gifts for RCH and a meeting or message from her favourite Indian film star Salman Khan. The party theme was Prem Ratan Dhan Payo and Ryka performed a dance to its title track.

“There was a time earlier when Ryka would get upset over the very mention of India as she associated India with all her initial pain and illness,” said Vandana sharing her daughter’s journey over the grueling years of treatment.
“Both Pankaj and I love India and it was a concern for us that she did not share the same feelings,” claimed Vandana.
“One day we somehow managed to convince Ryka to accompany us to Salman Khan’s movie Prem Ratan Dhan Payo and since then she has turned into his most ardent fan,” continued Vandana with a fond laugh.
“I had the best birthday ever, but it would have been even better if Salman Khan came to my party,” claimed cute little Ryka. When asked what her favourite food was, pat came the answer, “Salman Khan’s food”.
The little five-year-old with the large heart continues to be enraptured by her screen idol and her dream is to someday meet Salman Khan in person.