Let your passion guide you 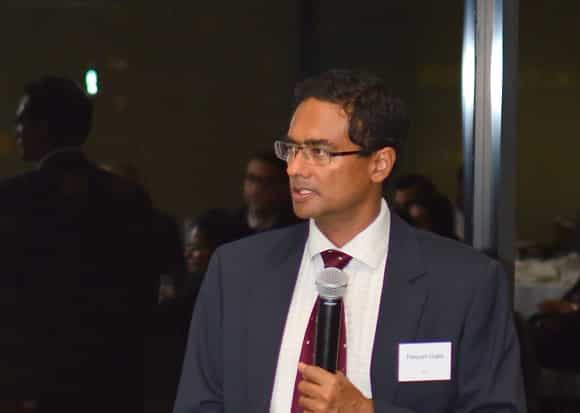 While a few weeks ago The Star was the venue for networking amongst Indian Australian young professionals at a themed ‘White Party’, at a recently held dinner in the offices of Deloitte Consulting, the evening was not only about networking, but also learning from one of the most successful Indian origin entrepreneurs in Australia, Peeyush Gupta.  It was the first annual sit down dinner organised by the Young Sikh Professionals Network (YSPN).

Established in 2012, YSPN has now chapters in Sydney, Brisbane and Melbourne, and has hosted more than 19 events, which have been attended by over 1,000 people. Speaking to Indian Link, one of the founders, Karan Anand said, “We are a not-for-profit organisation and as its name suggests, focus on empowering young professional Sikhs to connect and succeed in their careers. Most importantly, we’re proudest of the fact that we’re building a new conversation in our community – one focussed on reframing the discussion on what it means to be ‘successful’ and providing a platform for our members to accelerate their professional careers.”

For YSPN, it was a major coup having Gupta address its young members. Peeyush Gupta co-founded and was CEO of IPAC Securities, which was acquired by AXA for $205 million in 2002.

In a Q and A format, Director of Corporate Affairs and Communications at Computer Sciences Corporation, Sheila Dhillon, spent part of the evening with Peeyush Gupta discussing the theme “From Start-up to Boardroom – how Peeyush Gupta became one of Australia’s most successful businessmen.”

For over two hours, as dinner was served, over 60 young Sikh professionals listened as Gupta recounted his journey from a small office with one phone line to finally selling his business for over $200 million at age 51, and now sitting on the Board at some of the leading financial institutions in Australia.

And what were some of the takeaways from the evening? Gupta repeatedly spoke about having a passion for whatever you elect to do. “Yes, one needs to work hard to be successful, but if you have passion in what you do, then it will not seem like work. One of the reasons why IPAC became so successful was that the five owners all brought passion to the business and so we were able to commit our best efforts to the business. Your passion will be noticed by your clients, your co-workers and others – there is no reason why you will not succeed in what you do if you bring passion to your work.”

Peeyush Gupta also stressed the importance of communication while working in a team. “Soft skills do matter. While technical skills in what you do are important, your EQ also plays a large part in your success,” he added.

“Be curious in things, read your firm’s mission statement. Learn and question. Always try to grow as a professional and an individual. Learn to network and try to help others – you will be surprised how that pays off in the long run and even if it does not, you feel good about helping others,” Gupta guided the young professionals.

“Do not let discrimination be an issue in your success. For migrants and others, discrimination can be a natural issue to blame things on, but do not ever let it bother you,” he advised.

Speaking about his role as a Board member of SBS, Gupta spoke about his desire to give something back to the multicultural fabric of Australia. “While I was invited to join other Boards, I specifically applied for a position at SBS. Australia has been through some good economic and boom times and as such our multicultural fabric has not been tested. It is only in tough times that our social fabric can be tested. Media underpins the action of society,” he explained.

Peeyush Gupta’s advice to all was to ensure their quality of life, their values and their vision for what they wish to be are compatible with who they are.

YSPN and its team needs to be congratulated in this wonderful endeavour to connect their young members and to be guided by successful Indian Australians. It is their wisdom which can help these young professionals learn and experiment on their own roads to success.