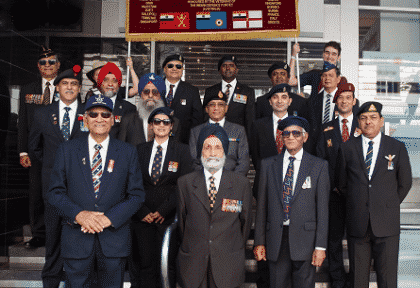 It was a gloriously sunny Brisbane morning as I made my way to Anzac Square to watch the parade. The crowd was hushed as the ADF, SES and police converted Brisbane CBD into a virtual fortress. According to Queensland Police, the crowd was not going to be as huge as last year’s, due to the additional security after the perceived threat of a terrorist incident. The blue and yellow Translink buses were replaced by the brown Bushmasters and the two RAAF F/A-18F jets roared above heralding the beginning of the parade.

The smartly turned out troops did a magnificent march but the crowd really erupted into spontaneous applause when the dignified and solemn veterans of various battalions passed by. There were many different branches of the Army, Navy and the Air Force and, it was a pleasant surprise to watch the contingent of the Indian veterans march by. It was a special day for the Indian contingent as it was the first time they took part in the Anzac Day parade in Brisbane. It was also a first appearance for the Timorese contingent.


One of the organisers of the Indian contingent’s debut march, Dr Braj Raj Pande told Indian Link that soldiers of Indian origin had taken part in both the World Wars, fighting on the side of the Allies, but recognition has been delayed for various reasons. However, he feels that this year’s event in Brisbane is a good beginning to the process of restoration of the due respect that the Indian martyrs of World Wars deserve. (Indian contingents have been participating regularly in Sydney, Perth and Melbourne for some 8 years now.)

Eighteen members took part in the Brisbane march which started at King George Square and ended at the corner of Queen and Wharf streets, and took approximately three hours.

Dr Pande’s voice swelled with pride as he described the immense sacrifices that the Indian troops made in various theatres of war and were in many instances wiped out to the last man. The Indian mule companies were the mainstay of evacuation of injured troops in the hilly terrain and they were operated by Indian soldiers. Almost a thousand mules had to be shot at the end of the operations so that they did not fall into enemy hands.
Dr Pande served as a doctor in the Indian Navy and retired as a Surg. Lt Commander. He saw action in the late eighties as part of the Indian Peace Keeping Mission in Sri Lanka. Presently, he runs a highly successful medical practice in Aspley, Queensland.

Capt. Geetika Singh was a member of the Army Service Corps which ensures that the fighting forces are kept fully equipped with supplies, munitions and other logistical requirements of the battlefield. She told Indian Link about the camaraderie and brotherhood that existed in the Indian army and the level of commitment shown by the troops towards the ethos of the armed forces. Geetika was the first member to join the army from not only her family, but the entire district in her home state of Haryana. She has not only broken through the so called gender bias that is prevalent in many parts of India but has surpassed her own expectations of what life in the army would be like.

Capt. Singh also emphasised the importance of the recognition of the contributions of Indian origin soldiers in both the World Wars and many other places where Indian forces have played a key role in peacekeeping and support missions.
Having served in several missions in counter insurgency areas in Kashmir, Capt. Singh is now a successful entrepreneur in Australia. She feels that the Indian Army has shaped the way that she thinks and acts in her daily life and she is also a role model for many young people back home in India.

Major Akshay Mishra is a third generation army officer whose grandfather served in the British Army Medical Corps. His father also served in the Army Medical Corps. Akshay graduated from the Armed Forces Medical College, Pune and went on to become the Regimental Medical Officer of Kumaon Scouts. He joined the elite paratroopers to earn his maroon beret which he sported at a rakish angle at the Anzac Day parade in Brisbane. He went on to become a Medical Specialist in the Indian Army and later specialised as an Interventional Cardiologist and works as consultant in Prince Charles Hospital and Wesley Hospital. In his free time he also travels overseas to provide cardiology services in countries where such facilities are not easily available.

The parade was led by Flt Lt Alfred Cooke who was a flying ace of the Indian Air Force and a Vir Chakra recipient for valour displayed in the air battles of 1965.
The rear guard was made up by Capt. Glenn Gomez who was happy to march in Brisbane this year, as he always went to Sydney in past years to participate in the Anzac ceremony. Capt. Gomez was inducted into the Third Battalion, 8 Gorkha Rifles after graduating from the erstwhile Officers Training School and winning the Sword of Honour. Capt. Gomez served on the Northeast and Western borders of India and later worked in Muscat and the United Arab Emirates before migrating to Australia. Presently, he works for the Brisbane City Council and was one of the instrumental people in getting the parade to Brisbane.

In fact, when the Indian contingent was marching by I was overcome with a passionate urge to pay my respects to the fallen heroes and I called out at the top of my voice, “Jai Hind!”
As my shout resounded across the crossing of Edward and Adelaide Streets, I was half expecting to get remonstrated. However, the Indian contingent cheered back with an even more powerful “Jai Hind!” which reverberated not only across Brisbane CBD, but perhaps right till Gallipolli where the spirits of the fallen Indian soldiers still linger at Anzac Cove.