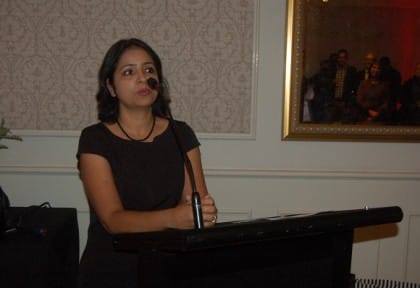 Farewell speeches, touching personal stories and even tears were the order of the day at the recent Melbourne farewell of Air India’s Regional Manager Australasia Madhu Mathen.
A select group of travel agents, airline staff and well-wishers gathered at the Yarra Suite, Marriot Hotel Melbourne to say goodbye to Madhu Mathen and to welcome Monika Thukral as the new Manager for Air India in Melbourne.

Mathen is leaving to take up the role of General Manager, Marketing at Air India’s Corporate Services in Delhi, with the responsibility of driving global sales. Monika Thukral will be the Air India Manager in Melbourne, while Sujoy Kishore is the new manager for Air India in Sydney.
Air India staff and stakeholders took the chance to express their gratitude for the support, inspiration and motivation that Mathen provided during his tenure.
Mathen claimed to have learnt a lot in the four years he has spent in Australia and he thanked his team for its support and commitment in helping him to consolidate Air India’s position as a provider of choice in Australia.
“To position Air India as an airline of choice was not easy, but I am extremely proud of the achievements I have had. My dream team here contributed to making Air India such a strong presence in Australia.
India’s largest national flag carrier and the third largest airline in India, Air India has seen many ups and downs since its launch in Australia in August 2013. Today it operates an alternating triangular route between Melbourne, Sydney and Delhi.


Offering direct flights to India and a Boeing 787-8 Dreamliner experience, the airline has now repositioned itself in the burgeoning tourism market and is planning on this year increasing the number of direct flights to 10 weekly flights between India and Australia.
Monika Thukral, who will be taking over the reins in Melbourne, thanked Mathen in an emotional speech expressing her gratitude for his guidance and mentorship. Mathen was credited for leading Air India staff to follow his vision by being a motivational leader and an inspiring human being.

“The change of hands and increased number of flights will pose new challenges, but thanks to the legacy that Madhuji has left behind we will move forward with confidence and continue to aim for success,” shared an airline staff member.
- Advertisement -
Share
WhatsApp
Facebook
Twitter
Linkedin
Previous articleVive La Difference!
Next articleHow to survive immigration