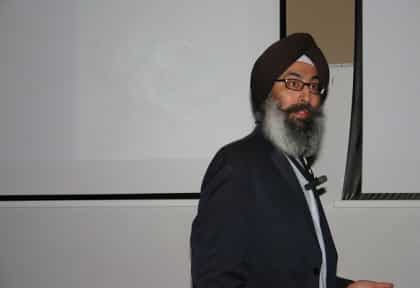 Hailing from the USA, leading activist and educator Harinder Singh presented a seminar at Swinburne University, recently, with a focus on servant leader principles. Several prominent members of the community, students, academics and other representatives attended the free event organised by the Sikh Interfaith Council of Victoria (SICV).
With its potential to create a positive change in society, the age-old concept of servant leadership continues to grow in its influence and inspire leaders today. There is growing interest in understanding the philosophy behind this holistic way of being that offers hope for the contemporary world. The learned speaker discussed how this transformational concept could be applied both in work and life to improve self and strengthen the community.

Harinder Singh is the co-founder of the Panjab Digital Library (PDL), a non-profit, voluntary organisation that provides digital archiving services for Punjabi heritage and texts. Launched in 2003 the PDL collects, preserves, digitises and offers accessibility to the biggest resource of digital material on Punjab. Singh is also the co-founder of the Sikh Research Institute (SIKHRI), an organisation that aims to connect people with the teaching of Sikhs.
According to Harinder Singh, historically, the origin and relevance of the servant leadership model in the Sikh religion goes back to the times of the first Sikh Guru Sri Nanak Dev and the principles outlined in the holy Granth. Clarity, consistency and currency is required to benefit from this belief system that incorporates ten core values of humility, submission, quality, service, self-sacrifice, justice, compassion, clarity, composure and courage.
Quoting John C Maxwell, Singh said a leader is the one who knows the way, goes the way and shows the way. A leader becomes great not because of their power, but due to their ability to empower others. Love inspired leadership creates a creative excitement that is directly proportionate to levels of leadership.

During his talk, Harinder Singh invoked history and referred to the Guru Granth to explain leadership in the current context.
The Sikh Gurus model for involvement in the public domain is based on following the practice of Nam (deep introspection), Dan (philanthropic spirit) and Isnan (relevant experience). According to him the Guru’s word is active and relevant in spiritual, political, economic or social arenas. One needs to not just read it but needs to connect with it.
The presentation reflected on current leadership culture and possibilities for the future. An interactive Q and A followed where a cluey audience put Harinder Singh’s vast knowledge of Sikhism, diverse interests in current trends and experience in leadership training, to the test. He answered with intelligence and authority.

Young Sikh activist Sukhjeet Kaur Khalsa raised a question in an attempt to understand why all the Sikh Gurus were male in a religion that espouses gender equality. In response Harinder Singh said that Guru Nanak proclaimed the equality of men and women as a mandate that was continued and encouraged by all the Sikh Gurus that succeeded him. This occurred at a time when the prevalent political and social condition did not offer women equal status. In Sikhism, both men and women are considered capable of reaching highest level of spirituality.
Harinder Singh pointed out that even today, despite the suffragettes and other movements, we still live in a patriarchal world. “The need is to create a society where women in leadership is a mandate not just tokenism,” he said.
Speaking after the event, Harinder Singh said, “I love doing what I do in making people think about the doctrines of Sikhism articulated in the Guru Granth Sahib. My aim is not to make people talk like a Sikh or act like a Sikh but it is to make people think like a Sikh.”