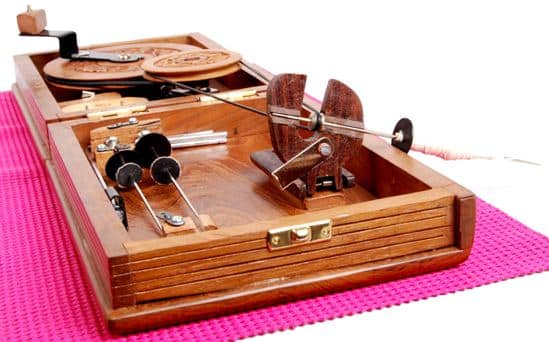 Reading Time: 4 minutesExponents of the art of spinning share their experiences in keeping alive this dwindling craft with FARZANA SHAKIR

The spinning wheel or the ‘charkha’ carries a special reverence for Indians. It was the symbol of the Indian Independence movement and originally held pride of place on the national flag, before being replaced by the Ashoka wheel. But with the advancement in technology, the faithful spinning wheel is facing extinction. All is not lost though, as Indian Link discovered diehard aficionados striving to keep the art of spinning and weaving on the wheel, alive in Australia.
I caught up with two such devotees, Jennifer Hopper and Valerie Walker, both accomplished spinners and weavers doing their bit to keep the wheel turning.
Jennifer Marjorie Hopper lives in Diamond Beach on the east coast of NSW, and teaches spinning and weaving at the Hand Weavers and Spinners Guild of NSW (HWSG-NSW).
Jennifer develop an interest in spinning at school. “My father was involved in wool production in the country,” she reveals. “At Hornsby Girls High School, I chose Textiles as one of my subjects for the Intermediate School Certificate. I enjoyed it and chose it for the Leaving Certificate. At the end of high school, I chose to train as a high school Textiles & Design teacher”.
She continues, “Both sides of my family included teachers for many years, so I was familiar with the role of teaching. I trained for two years at the Sydney Teachers College and was first employed by the NSW Department of Schools as a full time qualified high school Textiles teacher at Burwood Girls High School in Sydney, and later at Sydney Girls High School. While living in Sydney I attended evening TAFE courses at Brookvale with Eve Rashley, the ‘guru’ of spinning. Over time, I ran workshops teaching spinning and weaving, using wool. This expanded into the use of wool for felting, mainly because of the standard quality of Australian wool. I have taught many workshops in various parts of Australia, given demonstrations in high schools and been invited to other countries as well”.
Jennifer was granted life membership at the HWSG-NSW a considerable time ago.
Formed in 1947, the Guild is a not-for-profit organisation aiming to bring together people from various backgrounds who practise hand-weaving, spinning and other associated crafts. Efforts are also put into fostering and encouraging these crafts by providing opportunities for instruction, discussion and exhibition of work. The Guild boasts a membership of hundreds of enthusiasts from all over the state who meet once a month at their current premises in Burwood.
Even though spinning on the wheel does not have any meditative effect on Jennifer, she says, “I am inspired by the simplicity of the treadling and the rhythm achieved. It is possible when on the wheel to talk to others, listen to music, have a conversation, ask questions and sort out current problems in one’s life”.
Jennifer believes there is enough interest amongst younger Australians to keep the art of spinning and weaving alive, but she admits it needs conviction. “While it is not a hard craft to master, it depends on the access to people interested in teaching, the quality of the teacher and the student’s own interest,” she states candidly.
Valerie Walker, treasurer at the Canberra Spinners and Weavers Inc (CSW) has been teaching the art of spinning and weaving for over 30 years. She is also proficient in dyeing, knitting, sewing, wool tapestries, patchwork and embroidery.
For Valerie, the interest in weaving runs in the family.
“Two of my great great grandfathers were weavers; they came to Australia from England in the early 1800s as convicts. Also, my mother was always knitting and I wanted to learn where the yarn came from,” she says.
She learnt the craft in Canberra in 1974.  Shedding light on the CSW Valerie reveals, “The CSW was formed in 1966 by a group of ladies doing this craft.  Today there are 140 members and we meet every week. Member’s interests include felting, weaving, knitting, spinning, rag rugging, dyeing and tapestry weaving. Apart from workshops and group activities, CSW also organises an exhibition and sale of members work every year”.
Valerie adds, “The organisation created an International Scarf Exchange in 1994. A different Australian guild conducts this activity each year, and we have entrants from the USA and NZ this year.  Membership of CSW grew to 180 about 4 years ago, but is now going down due to rising fees and members ageing”.
The actual part of sitting, spinning and seeing the fleece being turned into yarn is what inspires Valerie about spinning on the wheel.
“It is very calming, I enjoy seeing my finished bobbin of yarn,” she states.
Describing the basic steps and techniques of spinning Valerie explains, “It involves deciding what the fleece is good for, preparing the fleece: combing, washing etc. Then spinning, once bobbins are spun they are plied and then maybe dyed, and finally used in knitting or weaving. One bobbin of spinning 100gms takes about 3 hours – you need two bobbins to make one skein of yarn. There are different techniques like the long draw, short draw, the woollen method, worsted method, fine and thick. My personal favourite is the fine lace spinning”.
Asked what she sees as the future of spinning and weaving in Australia, Valarie was honest in voicing her opinion, “It will still be as now, a small amount of professional spinning, but mostly a hobby craft”. She also does not believe there is enough interest in spinning on the wheel amongst youngsters.
“We are always trying to recruit younger people – knitting has upsurged in the last four years, though. The CSW is always out demonstrating to schools, fairs and markets, promoting these skills. We hope other guilds around Australia are doing the same,” she says.
Both Valerie and Jennifer think more can be done to promote and preserve this craft. In the meantime, experts like them all over the country are trying to keep the wheel spinning by passing their skills on to the next generation of weavers.