Keeping the light alive for Prabha 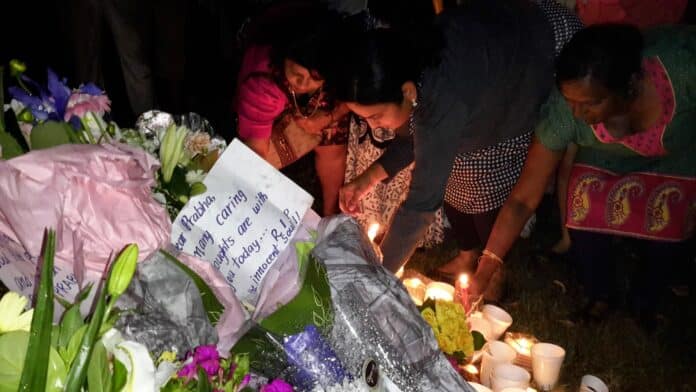 Prabha. It’s a Sanskrit term that means light.
It seemed so fitting to be lighting candles in a tribute to Prabha Arun Kumar.
Indeed, even the Gods reiterated this by splashing lightning across the skies, as Sydney’s Indian community gathered to remember one of their own.
In response to the fatal attack on the 41-year-old Indian national on Saturday 7 March in Western Sydney, hundreds of local community members gathered near Parramatta Park at dusk on 11 March, at the site of the crime, to express solidarity and pay homage to Prabha.
Braving the inclement weather, they poured in to retrace Prabha’s final steps.

The Facebook event page recorded that over 847 people were attending and 4,900 invitations were sent.
The walk commenced with a brief gate meeting after which everyone walked to the horrific site with slow, shivery steps, remembering her and spreading light for Prabha with candles.
The walk culminated near the tree where Prabha was attacked and members of the community along with Dr Geoffrey Lee MP and Councillor Julia Finn lit candles and laid flowers. Some also wrote condolence messages and waved signs that proclaimed messages expressing sympathy for the bereaved family and seeking to stop violence against women.

A minute’s silence was observed in Prabha’s memory and then prayers were recited by Sri Sai Temple representatives. Prabha was deeply spiritual and often visited the Sai Temple.
Harish Venkatapathaiah, Prabha’s friend told Indian Link that his wife and Prabha worked together and had moved to Australia around the same time in 2012. They were flatmates until September 2013 when Prabha moved to Strathfield after his own wife returned to India.
Harish spoke about his telephone conversation with Prabha three weeks ago. She told him that she was moving back to India in April and she was really excited about attending her house warming ceremony which was on the same day as her daughter Meghana’s birthday.
He said Prabha was looking forward to rejoining her family as it was almost three years since she had last seen them and she missed them deeply. Prabha always spoke to her husband at length and was very close to her family.
“She was a wonderful person and had great friends here,” Harish told Indian Link. “It is a case of bad luck and being at the wrong place at the wrong time.”

A local resident, Priya expressed concerns that crime has been rampant in the area and today there are many questions around the safety of individuals in the suburbs of Westmead and Parramatta.
Echoing many people’s thoughts, she said a lot still needs to be done, especially as the park is dimly lit and there are many residents living nearby who often use these pathways to commute to work.
Dr Geoff Lee extended condolences to Prabha Kumar’s family on behalf of the NSW Government. Calling it a terrible crime, he reassured the community that the government has set up a special task force to look into this.
He urged for anyone who was in the vicinity of Argyle Street, Park Parade or Amos Street that evening, to come forward and speak with police.

NSW Premier Mike Baird told Indian Link, “I was touched to hear the community had organised a gathering at the park where Mrs Prabha Arun Kumar tragically lost her life. Last night’s candlelight vigil demonstrates how shocked we are that such a vicious attack could have taken place in suburban Sydney, where we live in peace and harmony. The community united in mourning last night and Prabha’s family can take comfort in the knowledge they are in our thoughts and prayers at this devastating time. A dedicated team of police officers and detectives is investigating Prabha’s death and I am confident the perpetrator of this crime will be brought to justice.”
Police believe the incident happened after Prabha left Parramatta train station and walked along Argyle St ­towards the park following a double shift at the IT consultancy firm where she worked. She was speaking to her husband on her mobile phone while walking home and told him someone was following her. Moments later she was stabbed several times in the neck.

Police Superintendent Wayne Cox provided reassurance as he stood by everyone’s side supporting the walk and paying respect to Prabha.
He told Indian Link, “There are extensive resources we are putting into the investigation and we will bring perpetrators to justice.”
He sought the community’s support and urged anyone who had information in this connection to contact the police.
Meanwhile, India’s External Affairs Minister Sushma Swaraj has spoken with her Australian counterpart Foreign Minister Julie Bishop regarding the case.
Swaraj also tweeted that she had spoken with Arun, the bereaved husband.
Another tweet from her declared, “I am in constant touch with our consulate in Sydney. The consulate is providing all help.”

Arun Kumar, who flew into Sydney from Bangalore immediately on hearing the news, did not attend the walk himself but spoke to the gathering over a phone call thanking everyone for coming to pay respect to his wife.
Prabha’s brother Shankar also thanked everyone who made it there in spite of the harsh weather to pay respects to Prabha.
He said, “I can’t unfortunately thank all of them individually but my heart goes to all the people who have come there and thank you all. May God bless Prabha and all her friends and well-wishers.”
Just like her name, Prabha spread light and joy around her friends and family. It was obvious at the community vigil, that now she has also brought light and hope to the wider community to ensure that Western Sydney becomes a more secure place.
The walk was organised by Arunesh Seth via social media who reiterated that the purpose of the walk was to send a loud and clear message that we are not going to accept crime, especially crime against vulnerable people in our society.
The community stands united and sombre in the hope that Prabha’s light burns long and bright.
May her soul rest in peace.