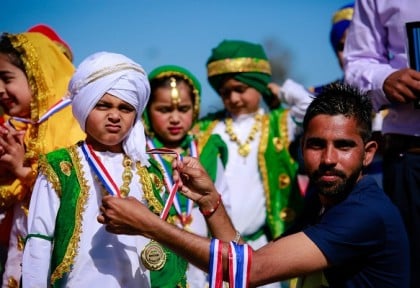 A community sporting event, Khed Mela brings the Punjabis together

It was for a unique event that hundreds of Punjabis gathered recently on the lush green grounds of Bertram Primary School.

Bertram Club in sponsorship with GIEC, presented a Punjabi and cultural sports event in mid-October. Some 1500 people – participants as well as spectators – got together for this ‘Khed Mela’, or sports fair. The intention was to encourage desi traditional sports in the community, in this land far from home.
Old-time favourites Kabaddi, Rassakashi (tug of war), and the card game Seep were on the agenda, as the Punjabi audience lapped it all up.
Of course for those less familiar with these games, there were other activities on offer, such as volleyball and kids races etc.
Mr Jim Seth, the Liberal Party member from Bassendean inaugurated the games.
The first event to start it all off was volleyball, and some intense though friendly competition ensued. The players all proved that they had been playing and practising their game for months. In the end, Bertram Club won the contest, with Star India Team claiming the runner-up position.

But the star attraction was Kabaddi which took place later in the evening. This much-loved game traces its origins to centuries ago, reportedly, even finding mention in our mythological texts. Two teams of seven players each, raiders and stoppers, play the game of strength: the raiders venture into the stoppers’ territory individually, in an attempt to tag one of them as they fend off the wrestling-style defence. The raiders are meant to conduct these attacks by holding their breath, and mouthing the chant “kabaddi, kabaddi, kabaddi”.
The game has been receiving great attention in India in recent weeks as the World Cup has just concluded. Australia participated as well, with former Hawthorn and Gold Coast AFL player leading the team as captain.
In the Perth edition however, Kabaddi Club was the winner of the Kabaddi contest. Perhaps some future members there for the Australian team?
Meanwhile, the races began in parallel. The littlies event created much mirth, with some kids insisting their dads accompany them, while others ran to the half way point only to turn around and race back to the starting point!

The ladies’ events were much tamer: lemon in spoon race and musical chairs were enjoyed by all.
The Seep Card Game, an indigenous version of Sweep, had its own fan following too. Sohan Gurusariya and Jagjeet emerged as winners.
Toll Club was winner of the tug of war game.

There was a queue of cultural feasts as well. The energetic hosts filled their banter with Punjabi nuances that were much appreciated.
The older uncles sat around in a group chatting happily looking happy and relaxed: this is what the era of no mobiles and technology must have looked like! Ladies with kids in prams picked their deals at the phulkari stall. Free jumping castles, face painting and a huge lolly bus kept the kids occupied.

The cultural podium didn’t go unoccupied either: the bhangra, gidda and solo performances were equally captivating.
At Khed Mela, a sports festival of sorts, many talented Perth players exhibited their skills, which may help carve a platform to launch some interesting careers. It also turned out to be a way of reaching the hidden talent treasures amongst our youth.
The event was supported by Perth Kabaddi Club, S.A.W.A, Bertram Primary School, Turban Trust, Virsa Club and both the Perth gurdwaras. A unique initiative from the chief organiser Harmandar Kang, and a great way to take the audiences back home, even if momentarily!