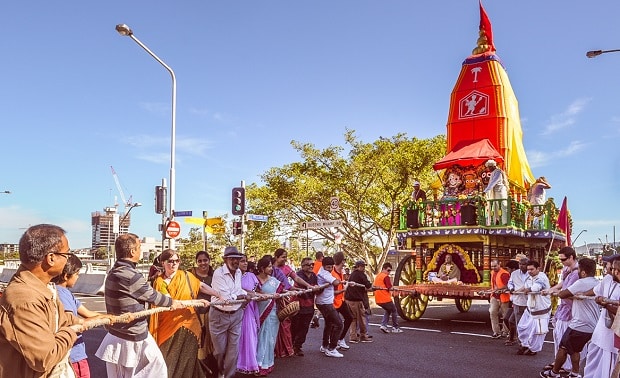 Reading Time: 3 minutesBrisbane witnesses its first ever Festival of Chariots

People ran out of the shops, or stopped by the roadside on the Saturday morning to get a good look.

A magnificent hand-drawn chariot was being pulled through the Brisbane CBD, with much fanfare and joy.

The Festival of Chariots, the oldest and biggest street parade in the world was held for the first time in Brisbane this year. It was organised by the International Society for Krishna Consciousness (ISKCON).

“We received permission from the Brisbane City Council to lockdown the CBD as the chariot passed through the streets,” said Niti Sheth, festival organiser, speaking to Indian Link at King George Square.

Specially brought in from New South Wales, the wooden chariot had a large red and yellow canopy decorated with swans, flowers and flags. It carried the deities of Jagannath, Baladev and Subhadra. Attached to the chariot were two thick ropes which were pulled by over a hundred people.

Its journey began from Queens Park winding through the streets and ending at King George Square.

Talking about the festival, Sheth said, “This festival dates back to over 2000 years, originating in Jagannatha Puri on the east coast of India. It is traditionally known as the Rathyatra. It was taken to the US in 1967 by the founder of the Hare Krishna movement, His Divine Grace AC Bhaktivedanta Swami Prabhupada. The festival is now celebrated in over 200 cities across the world”.

In India, thousands gather at the Jagannatha temple to witness a massive royal chariot carrying the temple deities, pulled through the city streets. (Those who saw the parade in Brisbane’s CBD, will have no doubts now about the origin of the term ‘juggernaut’). It is a privilege for Hindus to get an opportunity to participate in the pulling.

In its Brisbane avatar, the free festival became a celebration of peace, harmony and joy, extended to a fun filled day at King George Square, where there was something for everyone. With dances and drama, vedic culture and Ayurveda stalls, henna, face painting and craft workshops for kids, gift shops, there was India in the air! The delicious vegetarian meal being served at no cost, was particularly popular.

People from diverse cultures thronged the venue to be a part of this wonderful festival.

Tirene, an onlooker, fund herself absorbed in the sari-draping demonstration. “This festival is so colourful and it is all so welcoming,” she told Indian Link.

Narada Rishi, an ISKCON devotee, said, “It is good to see ancient culture being embraced in our modern times. It has been such a successful turnout and the crowd has been so receptive”.

Chef Ranchor Dasa, also of ISKCON, was passionate about the vegetarian cuisine that was being so popular on the day.

“We are what we eat,” he said with conviction. “We need to expose people to the delicious vegetarian cuisine and create opportunities for holistic vegetarian food”.

He conducts weekly vegetarian cooking classes at the Govinda’s Vegetarian Restaurant in Brisbane. He shared a sweet recipe with us:

Roast the semolina with the butter. Boil the water and sugar. Merge the syrup in roasted semolina. Stir in the blueberries. Cover for five minutes.

As a modern twist to an old favourite, Ranchor Dasa’s generously-shared recipe might as well have been an interesting parallel to the festival itself.