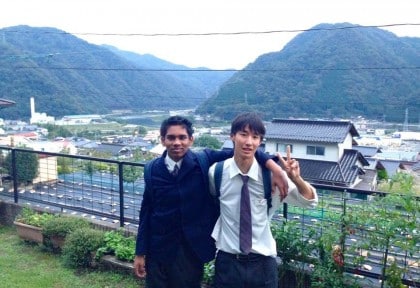 Amrutakrishna Kumbhar has won the 2016 Dunstan Award for excellence in languages and cultures.
A Year 10 student of the Norwood Morialta School, Amrut has shown exceptional brilliance in the learning and use of the Japanese language. He has just returned from Japan, in what turned out to be a dream trip for him. He was selected to go to their sister school, located in Takahashi in the Okayama prefecture.
Amrut told Indian Link, “During my stay in Japan I made countless friends and unforgettable memories. Takahashi is one of the most beautiful places I have ever seen. Unlike Tokyo it is located in the country side and we were surrounded by mountains. However, this being so, there was a brilliant mix of technology too so it felt like a regular modern city. In short I had the best of both worlds.”
It was during the trip that the young man learnt from his parents that he had won the award. It meant that he could not be present to receive his award – his parents Vidya and Ravi Kumbhar accepted it on his behalf from the Member for Dunstan, Steven Marshall.

But of course that didn’t dampen the enthusiasm for Amrut one bit.
“It made me feel good because I had demonstrated excellency in Japanese, given many speeches in the language and most importantly I was always involved with taking care of the exchange students who came from Japan regardless of whether I was hosting them or not. This award also means a lot to me as it shows proof of my hard work.”
All of sixteen, Amrut aspires to be a Japanese teacher and seems like a balanced and well brought up young man. He is a wonderful role model to other teens. His mother Vidya, a psychologist, says he is emotionally intelligent and ‘inwards- directed’. He likes to cook, play table-tennis, like his parents, and is a keen Judoka. A loving son, he helps around the home too. His dad is training to be a nurse and together his parents have provided a nicely rounded atmosphere at home.
Vidya is a follower of Amma, the hugging saint, Mata Amritanandamayi, and shared that Amrutakrishna was born after she received blessings from Amma, adding a spiritual dimension to the life of the lad.
We wish Amrut all the best for his future endeavours.