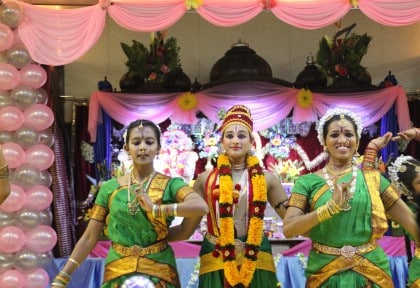 Celebrating 50 years of the International Society for Krishna Consciousness

It all started back in August 1965, when the 69-year-old Abhay Charanaravinda Bhaktivedanta Swami Prabhupada, popularly known as A.C. Bhaktivedanta Swami Prabhupada, boarded the cargo vessel Jaladuta from a port in Calcutta. Instructed by his guru to go to the west and preach Vedic knowledge, in his possession were his translations of Srimad Bhagavatam and a heart devoted to Lord Krishna.
His mission was to spread a love of God through the chanting of the ‘Hare Krishna’, also referred to as the maha mantra, and so A.C. Bhaktivedanta Swami founded the International Society for Krishna Consciousness (ISKCON).

This year is particularly special for ISKCON devotees as the organisation celebrates the 50th anniversary of its formation through a worldwide festival. Spread across 600 cities in 75 countries, this highly recognised and rapidly growing spiritual movement has touched many hearts. Popular for their beautiful temples, bhajans and kirtans, vegetarian food, service to community and festivals, ISKCON has grown in leaps and bounds since its inception. It is estimated that more than nine million people, known as the Hare Krishnas, worship at ISKCON temples each year.
ISKCON’s presence in Perth can be traced back to the mid-1970s. While en route to Melbourne, A.C. Bhaktivedanta Swami Prabhupada stopped over in Perth and stayed for 10 days. He laid the foundation for future activities, and over the years devotees have increased in numbers. At present, around 500 Perth families are associated with ISKCON.

The temple is located in the scenic Kalamunda area in Perth. It offers evenings of chanting, dancing, and feasting, and runs many community programs such as Bhakti Vrksa, a dynamic program which enables devotees to understand and practice the principles of Bhakti yoga in a small classroom experience. Their Friday evening Harinam through Perth CBD and prasadam, the sanctified food, is very popular among the locals. A proposal for a larger temple, which will extend the facilities at the present location, enabling the community to participate in larger numbers, is currently under consideration.

One of the most important dates on the Hare Krishna calendar is Janmashtami, the famous festival celebrated across the world to commemorate the birth of Lord Krishna. This is very special festival marks the epitome of love and celebration for any Krishna devotee.

This year’s celebrations at ISKCON Perth included a kirtan evening and Maha Abhisheka concluding with the midnight aarti. Great joy and fervor marked the celebrations as some four thousand devotees attended.
The beautifully decorated Lord Krishna and Radha deities stood on the altar, surrounded by flowers and incense. The ringing bells symbolised bhakti which every Hare Krishna holds close to their heart. Bhajans, kirtans and aarti filled the air of the temple with a sense of pure devotion and calm. Little children dressed like Krishna, Radha, gopis and gwalas were looking gorgeous and amazed the audience with their innocence.

Messages from the eloquent His Holiness Bhakti Rasayana Sagar Swami and His Grace Bhurijana Prabhu were a treat to hear. Not only did they talk about the core values of a Krishna devotee’s life, but they also wonderfully spoke about the pastimes of Lord Krishna in the simplest way. A Hare Krishna would have heard Lord Krishna’s tales many times, but each time it fills their hearts with happiness and brings out a deeper inner meaning.
Dance, drama and music performed by youngsters were filled with the essence of devotion and enthusiasm. This is in tune with the fact that the ISKCON promotes an artistic lifestyle. Children are encouraged to hone their talents and use them in Krishna consciousness. The dance performance by Narthanalaya School of Indian Classical Dance, and the concise Geetopadesh act by ISKCON Perth Drama Group were brilliantly executed and captured everyone’s attention.

Stalls outside the temple, staffed by committed volunteers, along with the prasadam corner, gave the event the feeling of a large family gathering.
Marking the occasion of its 50th year anniversary, Indian Prime Minister Narendra Modi, through a special message to the ISKCON family, acknowledged ISKCON’S journey of selfless service to society. He paid tribute to its effort to manifest ‘Vasudhaiva Kutumbakam’, a Sanskrit word which means ‘the world is one family’.

There is certainly much more to the Hare Krishnas than their vegetarian restaurants, dancing, singing, and orange Indian-style robes. For the hundreds of thousands of disciples, followers, friends and well-wishers of this movement, ISKCON lies at the centre of their lives, forming a sacred connection to each other and in the service of their guru, Srila Prabhupada and Lord Krishna. Hare Krishnas hail from different ethnicities, countries, gender and age groups, but the factor which unites them is their undying devotion to Krishna.
Visit the Hare Krishna Perth Temple at 159 Canning Road, Kalamunda, or visit iskconperth.com.