Into that Heaven of freedom 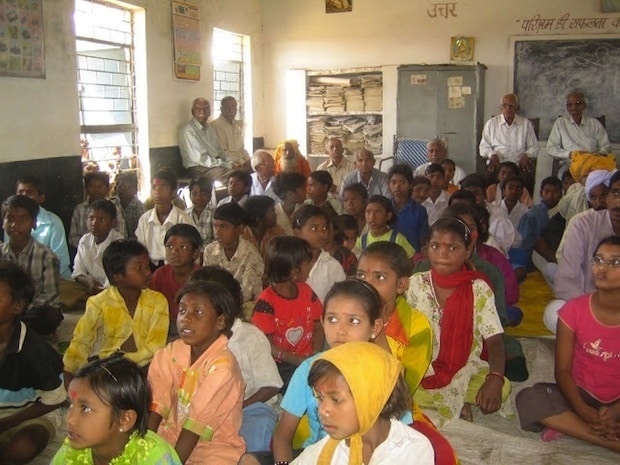 Reading Time: 5 minutesThe Ekal movement is helping the children of rural India to overcome the barriers of inequality through the gift of education

The great Nelson Mandela once said, “Education is a great engine of personal development. It is through education that the daughter of a peasant can become a doctor, that a son of a mineworker can become the head of the mine, that a child of farm workers can become the president of a country”.

An educated populace can change the fabric of a nation. India as a global phenomenon is marching ahead, and shows great potential for growth and development, but even today the class divide between the rich and the poor is unassailable.

In the age of globalisation, with great advances in technology, education is a vital tool in developing access to better opportunities.

Growth has to start at the grass roots level and by making education accessible to the children in rural and tribal India, we make them instruments of change. It is with this ideology that the Ekal schools came into being.

This year, the Ekal Vidyalaya Foundation of Australia (EVF) is celebrating its 10th anniversary. Founded according to the principles of the Hindu saint Swami Vivekananda, Ekal Vidhyalayas across the length and breadth of India focus on taking education to the most remote parts of the country, and shining a beacon of awareness into the lives of people who even today live in ‘dark times’.

The Ekal movement originally began with a group of young educators working with the tribes of Jharkhand in the late 1980s.

According to Swami Vivekananda, education signifies a man’s making. He said that if the people could not get to where education is available, then education must get to them.

They refined their teaching model with the premise of “Ek Shikshak, Ek Vidyalaya” – meaning “one teacher for every school”.

Ekal does not propagate the traditional schooling system, of fixed timing and rigid learning which had been the case when exporting the urban model of schooling to Indian villages. Instead, the Ekal system is tailor-made to suit the target audience and the teacher employed has a strong connection to the community. The flexible timings especially suit female children who often miss out on schooling due to being involved in other ‘chores’.
By the mid-1990s, there were over 1200 one-teacher schools operating in Jharkhand. Literacy rates improved and health workers noted a significant decrease in diseases and anti-social practices.

Ekal is different from many other organisations because the aim is not to make a difference to one child but to an entire community.

After the success of the Ekal model in Jharkhand, the Ekal Vidyalaya Foundation of India was established in 2000 as an umbrella organisation for various NGOs that run one-teacher schools in their communities.

The organisation has since grown in strength and is currently operational in a number of countries across the globe including Australia, the USA, Hong Kong and the UK.

The Ekal movement in Australia started 10 years ago with the sponsorship of 30 schools. Today Ekal Australia sponsors more than 700 schools.

At the original launch of EVF Australia in 2004, the organisation’s president Dr Nihal Agar said, “This movement will liberate about 80 million fellow Indians, living in remote, rural and tribal areas, from the darkness of illiteracy”.

Organisations such as Ekal strive to take education to remote areas with the sole aim of creating an educated and vibrant India, where all the parts, however inconspicuous, are relevant in making up the whole. It is this ideology behind the movement that attracts people to donate their time and money to the cause.

Education should be seen as a right and not a privilege of the select few. A strong education system is the cornerstone of any country’s growth and prosperity; it is a great equaliser of conditions and is an outlet from the throes of poverty.

Education of tribal children in India is important, not only because it is a Constitutional obligation, but because of the crucial need for the holistic development of tribal communities, woven into the fabric of the Indian society.

Ekal Australia currently sponsors 500 village schools and has supported more than 20,000 children over the past ten years.

A typical Ekal class has between 30 to 40 children from five to 14 years of age. Along with teaching basic literacy and numeracy skills, emphasis is given to health and hygiene practices. The organisation spends less than 10 per cent of the sponsorship money raised on administrative costs – everything else is contributed to the local community.

When the children of a country get the gift of education they are delivered the tools of possibility; life changes and we allow them to overcome the barriers of social inequality. Education for underprivileged children is the key, whether we are addressing healthcare, poverty, population control, unemployment or human rights issues.

It is a clichéd statement that India lives in her villages, but it is true. Basic education instils self-confidence, self-worth and makes life more meaningful and purposeful. It lifts a person’s self-esteem and makes them a worthwhile and contributing member of society.

India is in a stage of metamorphosis and is moving into a new era – an era of change, innovation and self-discovery. An educated, young population will be able to drive this movement, make it sustainable and make a visible difference. This will enable India to move into that ‘heaven’ that Tagore envisioned for us many years ago…

“Where words come from the depth of truth… Where the clear stream of reason has not lost its way into the dreary desert sand of dead habit… Into that heaven of freedom, my Father, let my country awake”.

Let us all be a part of this change and vision.

Ekal Australia celebrates its 10th anniversary on 26 July at the Bahai Centre, Silverwater. You can be part of this worthwhile movement by joining in their celebrations. For more details contact Devendra Gupta on devendra_g@hotmail.com. Visit the Ekal website www.ekal.org to learn more about the Ekal movement.