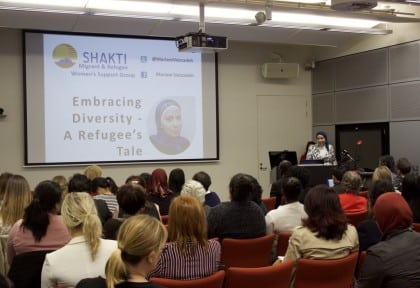 Some of the issues touched on were: the gender pay gap in leadership roles, the difficulties of finding employment for CALD women who face both gender and racial discrimination, barriers to integration for refugees, and access to social justice for women and refugees, such as lawyers and advocacy organisations.

Among notable speakers included Greens MP, Dr Mehreen Faruqi – the first Muslim women in parliament. Dr Faruqi mentioned that there are only 9 out of 42 women in parliament. And within the parliament, there is little ethnic diversity, as most MPs are Caucasian Australians.
It took Mehreen Faruqi over the course of 12 years to fully integrate and feel a sense of belonging in Australia. It should not take people 10 years; services and society should better assist migrants tointegrate. Living in Pakistan, she always thought that Australia would have gender equality, then she realised that there is still a gap in employment, leadership and education when she came here.
Labor MP Julie Owens mentioned the Women’s Budget Statement, which comes out right after the national budget, but is never spoken of. It is a fund that deals with women’s access to services, safety and women’s independence; any issues that impact women.

Prominent social media activist, Mariam Vesizadeh, also talked about how difficult it is for CALD women to get higher positions, in competition with white men. Despite the same job application or same promotion, women and CALD women in particular, face different barriers to getting the same job as a Caucasian man.
The conference also explored the mental health issues that domestic violence victims face. Women who experience domestic violence often go through post-traumatic stress, many disorders, depression, anxiety, and don’t talk about their mental health issues due to the stigma of mental health and fear of having their children taken away from them.
Many migrants and refugees are often told that social workers are home wreckers and will break your family. Such views are why people don’t report domestic violence. Speakers from our panel said that often the solution to domestic violence should not only be taking children away from their parents, rather there should be more support given to parents and children. Going back to mental health, support services and policies should direct attention to mental health awareness in domestic violence as a preventative measure.