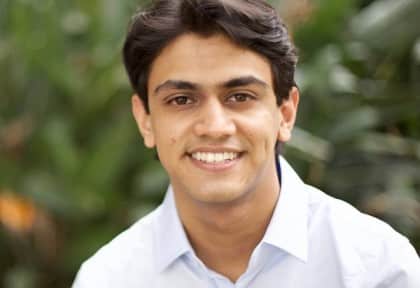 
This year, young community leader (and Indian Link writer) Khushaal Vyas was conferred the Youth Medal and recognised for his work with the Fairfield City Council Youth Advisory Committee along with his fundraising and outreach work.
“Winning the award was a lot of luck and a privilege only possible because of the support I’ve received,” Khushaal tells Indian Link. “I’ve stood on the shoulders of giants and without the support of so many different people and organisations behind the scenes, none of it would be possible. The award is for all of them and what they’ve done for me more than anything else.”
Khushaal’s work with the Fairfield City Youth Advisory Committee involved guiding the council on youth issues and establishing programs and events relevant to young people living in the area. It culminated in organising a major youth event, the Bring it On Festival, and helping to lay the foundations for the building of a new multi-million dollar youth centre.
“The centre will provide incentives for young people in our area to get active, get involved and also have access to important development programs,” he shares.
As President of the UNSW Law Society, Khushaal has organised for students from the Law Society to volunteer in Dubbo, in regional NSW, twice a year, working with and mentoring young disadvantaged children along with Indigenous Elders, solicitors and various community centres.
“It’s been a project very close to my heart and has really changed my life,” Khushaal says.
In the current political and social climate, many young people feel that their views and concerns are being ignored, with characteristic humility, Khushaal believes all youth have the ability to make a difference.

“I think the biggest message is that it is in our hands to empower ourselves,” Khushaal says. “The types of change we want to see, whether it is something as major as government policy, or something in my case like advocating for a new youth centre for young people in need in your local community, we’ve proven to ourselves time and time again that, as cliché as it sounds, change, though often difficult to achieve, is always in our grasp.”
As a young man of Indian background in his early twenties, Khushaal is well aware of the importance of promoting intercultural dialogue and co-operation.
“Multiculturalism at its core is about the feeling being accepted and feeling your place in the community. In the bigger picture, multicultural issues and the strength of Australia’s belief in multiculturalism will determine Australia’s success as a whole. The stronger our community is, the more we can contribute together,” he says.
But looking at the proposed changes to 18C and the current political rhetoric, is the government doing enough to reach out and engage with young people?
“This is difficult,” Khushaal admits. “On the one hand, I’ve always been Australian first and felt as though I fit right in from the outset. Perhaps that itself is an example of successful multicultural policy through lived experience.”

“At the same time, if you switch on the news, or even social media for that matter, it’s hard not to see anti-immigration and racist rhetoric. It’s easy to spot and feel afraid of a growing anti-multicultural voice in Australia and around the globe.”

What does he think the government should do to change these feelings of disengagement and quell this rising intolerance?
“I don’t think there necessarily needs to be a youth-centric approach in order for multicultural policies to reach young people. Simple events, even those that are heavily promoted such as the Harmony Dinner, are incredibly important symbols that demonstrate to people – young and old – that multiculturalism is an important Australian value. It’s simple gestures that allow everyone in our community to feel as one and feel that they have a place. That’s important, rather than focusing on removing protections that predominantly look after ethnic communities.”
An AFL tragic, Khushaal continues to work across various sectors in the local community with events including the Cancer Council Relay for Life, Cabramatta Moon Festival and several youth conferences.
When asked what this award will mean to him in 20 years’ time, Khushaal replies thoughtfully, “Hopefully it will be something I look back on as the catalyst that amplified my ability and desire to advocate for multicultural and just causes in this amazing country.”

Three people who inspire you

At 87, she is still working as a professional gynaecologist and helping the most vulnerable and poor people in India. In her entire working life she has never stopped in her service to others and to say that she inspires me is an understatement.

She’s spent her entire life advocating for the rights of vulnerable village communities across India. You’ve probably spotted a trend here, but my aunt and grandmother are two very special people who probably don’t know how much they’ve shaped my life

Teela started the Dubbo program with me and is a proud Wiradjuri Woman who has stared adversity in the face and achieved so much. I’ve been so lucky to work with her and she’s inspired me to do more than what I ever thought I could.