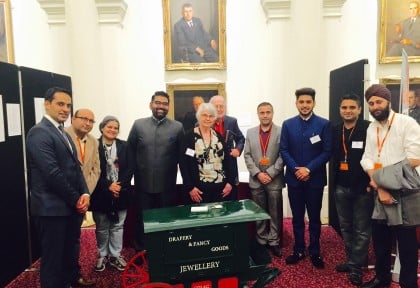 Australia’s multicultural identity is not the recent phenomenon you may think. Immigration was common during the 19th and 20th centuries as people came to discover the opportunities and resources in the land Down Under. People from Britain, Europe, China, India, Turkey, Egypt and Afghanistan, to name a few, ventured by boat to either conduct business or settle and start a new life on a different continent. The number of Indian students and their relations in Australia is really not that new!
The Victorian community was recently invited to attend a spectacular exhibition in the Queens Hall at Parliament House, which displayed the marvellous contributions Indians have made in the development of modern-day Australia.
The Australian Indian History Exhibition was opened in a formal ceremony on 12 September by Minister for Multicultural Affairs Robin Scott, Speaker of the Legislative Assembly Telmo Languiller, and Deputy President of the Legislative Council Khalil Eideh. In addition, Manika Jain, Consul General of India in Melbourne, was in attendance, as was Jasvinder Sidhu, the coordinator of the event.

For the first time ever, the society showcased untold stories, photographs, artefacts and displays depicting the work undertaken by the Indian community in Australia over the past couple of centuries. Research suggests that nine merchant vessels on the First Fleet were owned or under lease to the English East India Trading Company. Thus, there is no doubt that most of the seamen on board were Indians.
The Australian Indian Historical Society Inc. was founded in March 2012 by four Sikh Gurudwaras to support Len Kenna and Crystal Jordan who have worked tirelessly to deliver their research and findings to the community. They have volunteered their time over the past two to three decades to analyse and publish information about India’s influence and role in Australia’s development and multicultural identity.
“This exhibition will have a strong influence on the public’s understanding of India’s involvement [in Australia],” said Telmo Languiller. “From primary school students to tourists to parliamentarians – all will be encouraged and allowed to view the exhibits and talk to the researchers and volunteers.”

The exhibition covered various aspects of history including trade, living standards, memorials, hawkers and wagons. Len and Crystal noted that there are “important facts which will be of interest to the Indian and the broader Australian community, for example: India’s involvement in mounting the First Fleet; The role of Indians and Anglo-Indians in the discovery of Bass Strait in 1797; The first Sikh Religious Service in Australia was held at Benalla in 1920; There were Muslim, Hindu and Sikh Cameleers who explored inland and outback Australia.”


Many volunteers have contributed and supported the research efforts, sourcing information and uncovering historical artefacts. They have found that diversity and multiculturalism are intrinsic aspects of Australia’s identity. According to Len and Crystal’s research, “The first Muslim Indian landed in Tasmania in 1813, the first Hindus came as indentured labourers in 1816, and the first Sikhs landed in Brisbane in 1844.”
With regard to Victoria, the rebuilt Sydney Cove ship, previously named, the Begum Shaw, is the second most important ship to enter Australian waters. It sailed from Calcutta in 1796 with a crew of 42 Indian sailors, known as Lascars, and seven Anglo-Indians. It was shipwrecked in 1797 at what is now Preservation Island, north-east of Tasmania.
This information is extremely valuable and Len and Crystal’s devotion and perseverance to uncovering the untold story is inspiring. The Victorian community will benefit from, and appreciate, their research and we will definitely turn to their work as a source of authority.
- Advertisement -
Share
WhatsApp
Facebook
Twitter
Linkedin
Previous articleNew 5-year temporary parent visa announced
Next articleA translated Twelfth Night