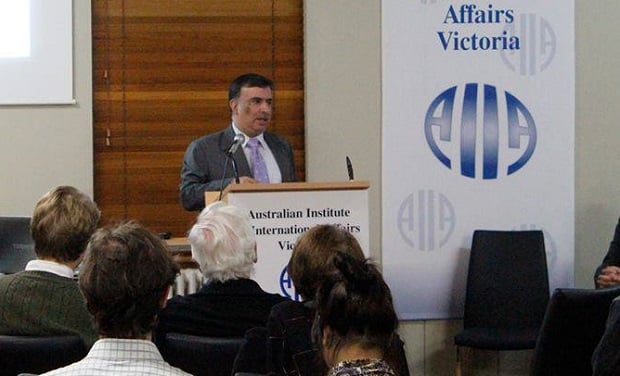 Reading Time: 4 minutesIndia’s role in Australia and the world is rapidly changing from a disinterested to a crucial one, writes CHITRA SUDARSHAN

Professor Mattoo was asked to speak at the Australian Institute of International Affairs, Victoria (AIIAV), a 125 year old institution on August 14, on the world as viewed from the Indian perspective. Amitabh Mattoo is the director of the Australia-India Institute (AII) at Melbourne University and is one of India’s leading academics on Indian foreign policy, currently on leave from New Delhi’s Jawaharlal Nehru University, as professor of International Politics and Disarmament.  He is the director of the India-Afghanistan Foundation and has previously held the position of Vice-Chancellor of the University of Jammu from 2002 to 2008.
Professor Mattoo began with some broad brushstrokes, drawing the audience’s attention to some significant facts about India and why it should be of immense interest to Australia and the world, in the coming years. First, India’s demographics are significant:  it has a relatively young population with some 500 million Indians below the age of 30.  The rest of the world is saddled with an ageing population – including China, which is feeling the effects of its one-child policy.  “If India can train and educate its youthful population and help them take their place in a growing economy, the future augers well for the nation; if it doesn’t, a failure of massive proportions awaits the country,” he stated.  Second, it is a democratic country; third, it is a diverse country; fourth, it is of increasing economic significance – it is now the third largest economy in the world after the US and China – having overtaken Japan recently. Fifth, even in terms of political and military power, it will wield influence in the future.
Having framed the context of India’s importance in the coming years, Prof Mattoo went on to trace the various phases of Indian foreign policy and how India’s view of the world has changed significantly over the years. He characterised the early years as the ‘years of idealism,’ when India tried to take a principled stand in world politics, as far as it was able. This phase was followed by what he termed the ‘fractured years,’ the 1960s, when its principles began to be challenged and put through enormous strains in the aftermath of the Sino-Indian war.
Critics of Indian foreign policy have argued that these were the years when India, without the wherewithal to flex its muscle, had only words and ideals to espouse on the world stage. Mattoo believes this is too cynical a view; India did care for certain principles and stood by them despite being put to the test.  The post-1971 period, the ‘ascension of power,’ was a period under Indira Gandhi who understood that the currency of power was what mattered in an anarchical world, and went on to wield and consolidate India’s military power, beginning with the intervention in Bangladesh.
In recent years, especially in the post-1990 era, India has pursued a new power-oriented foreign policy. Indeed, when in 1998 India tested its nuclear devices, it did not even pretend it was for peaceful purposes, whereas in 1974, it went to great lengths to call it PNE (Peaceful Nuclear Explosion). The BJP government announced as a matter of fact, that India was a nuclear weapons power.
India’s relations with the US have undergone a complete makeover, and they have burgeoned into one of the durable partnerships in the region. India has launched a ‘look east’ policy to forge meaningful links with East and South East Asia. These have been tectonic shifts in the Indian foreign policy mindset.
As for contemporary India, Mattoo highlighted the recent Lowy Insitute-AII’s report, the India-Australia Poll which produced a report on the results of a nationally representative opinion survey of 1233 Indian adults conducted face-to-face between August 30 and October 15,  2012.  (The full results of the poll can viewed at http://www.aii.unimelb.edu.au/sites/default/files/IndiaAust-Poll.pdf)
Some of the views that emerged from the survey were surprising and interesting. For instance, Indians saw Australia as a Deputy Sheriff of the US in this part of the world. Predictably, a large majority of Indians viewed Pakistan and China as the two most serious threats to India’s security. However, although Indians were apprehensive about a rising China, they were quite ambivalent towards it; China is seen as a threat but it is not clear about what can be done about it.
Indian attitudes towards the US have changed dramatically since the 1990s, it is now one of partnership with the US; India nevertheless feels it can and should be able to differ with the US on certain issues and be able to criticise it, for example on Iraq, Iran and Afghanistan.
Mattoo drew the audience’s attention to a report titled Non-Alignment 2.0 which was launched in 2012 by a group of eminent academics, foreign policy analysts and India specialists. Although the report surprisingly calls for India’s disengagement from the subcontinent, its authors still think India should seize the initiative in its relationship with Pakistan, as they believed that the majority of Pakistanis wanted friendly ties with India.
Concluding the talk, Mattoo stressed that ultimately India wished for stability in the region so that it could look after and provide for its citizens, and be at peace with itself.  India would change its neighbourhood if it could – and locate itself in the middle of the Pacific Ocean – alas! Those are not real alternatives!