Indian veterans do us proud 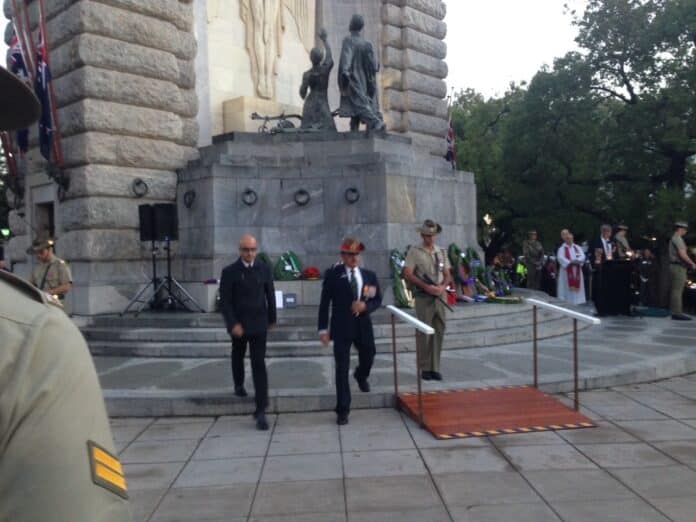 The first ever Indian contingent participates in Adelaide’s Anzac march.

Apart from being the historic centenary event, this year’s Anzac Day had extra special significance for a band of brave former armed forces personnel from India now living in Adelaide.

This is the first time ever that members of the South Australian Indian Defence Veterans Association were given the privilege to fully participate in the commemorative march along with Aussie diggers. Achieving this privilege was not a walk in the park for the Indian veterans whose forbears in their thousands fought shoulder to shoulder with Australian and New Zealand soldiers at Gallipoli, many of them making the ultimate sacrifice of losing their lives in defence of the British Empire.

Any kindred spirit that might have prevailed in the trenches of war one hundred years ago did not always permeate in the present day peace time. The Indian veterans’ desire to show their mateship by partaking in the Anzac Day ceremonies was not entertained by those in charge of the day’s events for many years.

It was only after persistent efforts by the small band of the Indian Defence Veterans (IDVs) over the past couple of years, that the State RSL and the Anzac Day Committee permitted their participation in the commemorative march on 25 April this year. This group of determined soldiers marched with their hearts pumping with pride beneath the prestigious medals on their jackets and spring in their step, to the cheering of their friends and family members. And they joined their peers in Sydney, Melbourne and Perth who have been given this privilege for several years now.

“The outcome is an acknowledgement of the significant contribution and sacrifices made by the British Indian Army fighting alongside the Anzacs. This is also a historic moment for the 23,000-strong Indian community living in South Australia, to make them feel recognised and included in the wider South Australian community,” said Major General Vikram Madan (Retd), President of the Veterans Association.

Vikram’s successful campaign for the veterans to become fully-fledged partners in the day’s events was helped by the powers that be in the State Government circles who value the need for stronger ties with India. A very supportive editorial in The Advertiser, the only morning daily, and a flood of letters from many well-meaning locals also helped the cause. Indian Link also played its part by highlighting the sacrifices of the Indians at Gallipoli in its article Shoulder to shoulder in its September issue last year.

The excitement and preparations for the day actually started at the beginning of the New Year when finally this group of 19 IDVs was invited by the State President of the RSL to be part of the centenary commemoration. Officers and soldiers dug into their suitcases and cupboards and took out their medals and berets to shape and polish them. Many had left them back in India and hurriedly asked their folks to send them over.

The day began with the traditional Dawn Service at the National War Memorial on the North Terrace where over 10, 000 people filled the thoroughfare, some of them waiting from four in the morning to grab vantage points. On behalf of the Indian contingent, Major General Vikram Madan laid the wreath at the memorial, accompanied by a Pakistani community leader, Mr Faisal Chaudhary, since Pakistan and Bangladesh were part of India in 1915.

The commemorative march started at 9.30am and all the 19 veterans and four direct descendants of the IDVs marched with a sombre mood befitting the occasion. It was a moment of remembrance of those 1500 ancestors who died at Gallipoli and over 4000 who were wounded in battles in the Peninsula. The IDVs, in keeping with the military traditions, saluted the War Memorial on the North Terrace and the Vice Regal Dias on the Torrens Parade Ground before concluding the march at the Cross of Sacrifice opposite the magnificent St Peter’s Cathedral and the swanky cricket stadium where they were joined by their family members.

The eventful day continued with a brunch hosted by Lt. Col Vivek Chauhan and his wife Pusha, a veteran herself, at their sprawling office complex Viv Sports. Everyone experienced a sense of fresh bonding and bonhomie with a silent resolve to help each other in times of need and look after the new arrival of any IDVs to South Australia. The IDVs, Vikram said, would continue their camaraderie and spirit in the Anzac Day commemorative marches in the years ahead with added strength.

The Advertiser editorial last September read “…there is nothing that would suggest the inclusion of such a brave and loyal ally (like India) would do anything but enhance the Anzac march.” The centenary march lived up to this expectation.