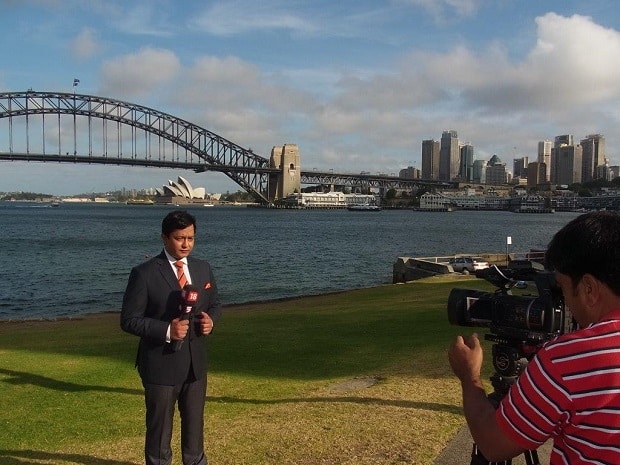 Just over five years ago, the Indian media turned its blowtorch on Australia and in one broad brush, painted the country as racist and unsafe for Indians. With little research or analysis, the attacks on Indian students were loudly denounced as racist and headline after headline screamed that there was a jihad against Indians in Australia. That most of the racist claims were unfounded and the problems random was soon clear, but the media had moved on and Australia was another story of the past.

Now six years down the track, the Indian media descended on Australia to report not only on the G20, but also the great Modi mega event which now seems set to follow the new Indian Prime Minister whenever he goes overseas. If there are over a 100 TV channels in India, it seems more than half were in Australia trying to find that special story about Australia and Australians that could make good coverage.

Fortunately, the time difference was such that the stories filmed in Australia at midday could be televised live during the next morning’s peak viewing hours. While some TV channels sent only one crew, the anchor and the camera man, a number sent two crews, one each for their Hindi and English platforms.

And so, for four days running, viewers in India saw the front of the Allphones Arena, with TV reporters pointing excitedly to the posters behind them of Katy Perry who was slated to perform there only days after PM Modi spoke at the venue.

The TV-wallahs were busy scouting for ideas to fill in their time – and no doubt to justify to their bosses in India that their trip was money well spent. This of course allowed a number of Indian Australians to get their 15 minutes of fame on Indian television. While the Modi event organisers had run up a number of activities for them, such as a visit to Sanskrit schools or a walk down Little India in Harris Park, the visitors down under wanted their own stories.

One crew spent a few hours on the harbour on the Sydney Showboat filming the breathtaking cabaret show by the Moulin Rouge girls in their full dance costumes and feather headgear. Weaving these shots through interviews of guests on what they expected from the Modi visit, would have made for great visuals no doubt, but we wonder what the staunch Hindu allies of the BJP thought of this.

Another crew got a group of local Indians together who recited poems about the Indian Prime Minister.

Another spent a day filming at the local radio studio with talkback about the PM Modi visit.

And even as restaurants with a Modi flavour menu were visited, the Australian garbage collection system (with different bins for refuse, recyclable bottles and paper) were explained to viewers in India as a supplement to Modi’s swatch bharat campaign. In fact, by hook or crook, the Modi-fication of Indian Australians, or of the Australian lifestyle, was grabbing prime time in India.

Not a single TV crew though, decided to relook at the students’ issue with a fresh perspective: why did you not hunt down Saurabh Sharma, the Melbourne youth who was brutally attacked on a train, and whose CCTV footage you aired all-day long on a loop, creating the diplomatic impasse between the two countries that has taken years to rebuild? If you had, you would have found out that he is happy and healthy, and travelled by the same train at the same time of night each night, long after the incident, and that a compassionate Australian dentist actually paid all of his medical costs. Now would that not have been a story?

And while all of this was on, experts were paraded on split screens in India as they spoke about mutual opportunities between the two countries. While the concept was good, it was painful to watch so-called experts who had little idea about ground realities. According to one ‘expert’, there are over 700,000 Indians in Australia currently, and numbers will be up to 1,000,000 in three or four years. Sure, inflate the initial number by 40 per cent and be out by over 10 years in your analysis, as long as the facts do not get in the way of a good story! (Post the event, one ‘expert’ even claimed that Narendra Modi had staged the entire Allphones Arena event himself by flying planeloads of people from India to Australia.)

The anchors on India’s many news channels threw to their reporters in Australia frequently, but too often mouthed the words “Indo-American relationship”, perhaps by sheer force of habit, instead of “Indo-Australian”, and nearly all of them referred to the Australian PM as Tony ‘Abort’. Let’s just hope this does not translate into action as far as the renewed relationship between the two countries is concerned!

Meanwhile, for Indian viewers themselves, the news segments were sometimes sketchy, and many people actually believe that the “Modi Express” is a regular train that now runs between Melbourne and Sydney, inaugurated to coincide with Modi’s visit.

As for the local Indian-Australians, everyone claimed repeatedly that they were ‘excited’ about the PM’s visit, but failed to say why or to elaborate any further.

But on ‘Modi magic Monday’, the TV-wallahs did their job well, taking up positions around Allphones Arena as hordes of Indian Australians found their way to the stadium. Local media also joined in with four channels – 7, 9, 10 and ABC – also having their teams at the venue. With plenty of colour and with the clashing of the garba sticks and the drums and the exuberance of the people, there were some fantastic filming options.

And as the crowds moved into the arena, the TV crews followed and a lot of Australia beamed its way into the living rooms of India. Friends and families seeing their loved ones from down under on their TV screens were busy calling up or Whats-apping.

The media filled its role to inform and entertain and the chest beating about racism and student violence were a thing of the past.