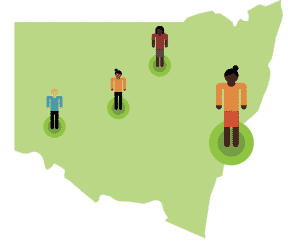 Reading Time: 4 minutesPassion for community work and a desire to effect change appear to be motivating factors for the Indian-origin Australians in the fray at this year’s state elections

A bit about their background

Raman Bhalla: Originally from Punjab, but worked in Hong Kong before arriving here in 2000. Chartered accountant by profession, and have worked with the top investment banks and in my own private practice.
Charishma Kaliyanda: Born in Bangalore but moved here as a child aged four. Was involved with education campaigns at uni, such as when the academic session was cut short by two weeks. Work as an occupational therapist.
Susai Benjamin: Lawyer by background; originally from Kerala. Set up a free legal advocacy service formally for eight years, although worked in advocacy much longer informally.
Reena Jethi: My career as a teacher has been dedicated to helping our next generation prepare for the challenges that lie ahead.
Vinay Kolhatkar: I moved to Australia in the late 80s and built my career in the banking and financial services for over 20 years. I am the Publisher and Chief Editor of, and a Columnist at The Savvy Street and have also authored a novel, The Frankenstein Candidate.


Balaji Naranapatti: I spent my early years in India, graduating with an engineering degree in electronics. Subsequently, I lived for a decade in California, first studying and then working in IT in the Silicon Valley. I moved to Australia in 2001 to work in the IT sector in Sydney. My wife is a scientist with Westmead Millennium Institute in Westmead. We have a five-year-old son who is now a student at Westmead Public School.
Atul Misra: When Indians move out of India, we do well professionally and make a lot of money. A similar interest needs to be shown to integrate into the political systems of the place we live in. I have worked at Griffith Base Hospital for two years and am in the process of establishing a private practice in Griffith. I have lived in India, the United Arab Emirates and North Africa before moving to Australia.

Indira Devi: I am a Malaysian-Indian, my roots are from Kerala. I have two children.
Mahesh Pundpal: I have worked in various industries as an employee and advisor. I have a young family and a mortgage. In short, I am your everyday common Australian citizen.
***

Charishma Kaliyanda: I’m passionate about making things better for the community, whether through politics or other ways. I’m quite passionate about my career as well, but there will always be some level of involvement in community affairs. I think I can truly make a difference. I also think it is important for younger migrants to see some different faces, watching other people accomplish things. If I can help break stereotypes, I’d be very happy.


Reena Jethi: Politics is nothing but another name for community service and serving the community at large. Patriotism and dedication to our country and community is the driving force behind my involvement in politics in Australia. Regardless of whether I win or lose, I will continue to serve the community.
Vinay Kolhatkar: Many years ago, I took this task upon myself to champion for individualism. This is the key to human happiness. Although it will take time to bear fruit, I will personally continue to espouse the ideal of economic and individual liberty. As a party, the LDP also sees this as long journey toward educating the Australian public. The LDP will continue to distinguish itself from the tired old Labor-Liberal politics, which is just a choice between Tweedledum and Tweedledee. Win or lose, the fight will continue.
Raman Bhalla: Politics is not a one-day game! I’m in it to create change, and change doesn’t happen overnight. Come what may, I’m going to be involved with my party like I have been in the past before being selected.
Balaji Naranapatti: I was driven to participate in politics to drive policies that are environment friendly, socially progressive, promoting public education and a smarter society with a better public health system. Win or lose, my energy will continue to be devoted to helping the Greens work towards these now and in the future.

The mix of sub continental personalities and policies that has entered this year’s NSW State election clearly varies significantly despite the common ancestral origins of the participants. All appear committed however, to community values such as participation and democracy, and are taking the impressive step of forging ahead with their particular brand of politics so as to effect real change in society. The only serving Member of Parliament that is of Indian origin to date has been Lisa Singh who represents Tasmania in federal parliament. Perhaps this year’s state election will add to this tally.