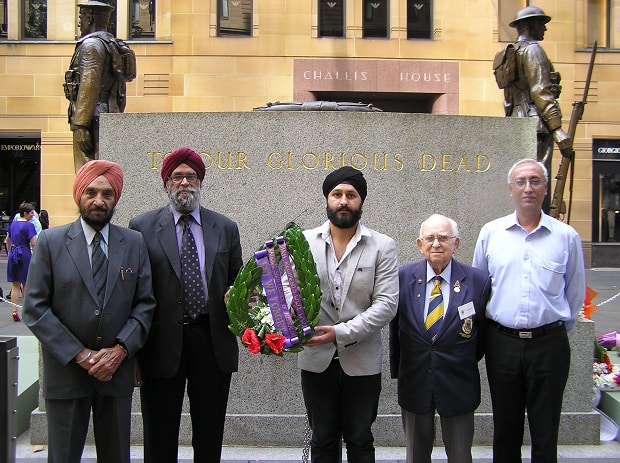 The Sydney Anzac Day parade had its first Indian participation in 2007, when a small Sikh group marched as part of the contingent called British Commonwealth Forces, made up of a number of other nationalities. The Sikh Council of Australia and the Sikh Scout Group got in touch with Anzac House and RSL Headquarters with a request to be allowed to march. They established a case by putting forward accounts from history of the Sikh participation in Gallipoli gathered from various sources.

The evidence was compelling, and the authorities were convinced.

It was an emotional experience for all involved. Vickram Garewal, executive member of the Sikh Council revealed, “One of our senior members ended up rather teary – he said he had never imagined that he would wear his medals with pride ever again, let alone march in the city streets to the adulation of the crowds”.

Since then the Anzac Sikhs have only gone from strength to strength, prompting the Nepali and Indian contingents to also follow suit.

The next year in 2008, their numbers had increased to 36 and they marched as a separate contingent all on their own, under a Sikh Regiments banner.

The turbans made them look different from others, and they received encouraging remarks, overwhelming applause and were very well received by the onlookers, who cheered and waved flags at them.

Chris Perrin, then the secretary of the New South Wales RSL specially congratulated the Sikh float.

“I am glad that you were able to march on Anzac Day and that Sikhs were received so well by the crowd of onlookers, despite inclement weather. From my part, I thought the Sikhs were one of the better “turned out” units/associations marching in that part of the parade. I look forward to assisting you once again in arranging your participation in the 2009 Anzac Day march, and the conduct of a Wreath Laying Ceremony,” he said.

In 2009, eighteen-year-old Shubhdeep Singh Bhangu was part of the 30-strong Sikh contingent. He proudly carried the Australian flag, resplendent in his RAAF uniform. A first-year cadet training to become an armaments engineer, Shubhdeep told Indian Link then, “I’ve been wanting to march in the parade ever since I heard there would be a Sikh presence”.

An added attraction was the professional bagpipe band that accompanied the Indian contingent. Dasmesh Band, the largest private Indian band, second only to those of the Indian Army, were specially flown out for the event. With their turbaned get-up, their “Sikh take on the Scottish tradition” won hearts wherever they went. At the end of the parade, they got into an impromptu jugalbandi (jam session) with a Scottish band, as people stopped on the streets to watch. At the end, as Dasmesh played Happy Birthday for an elderly wheelchair bound passer-by, she openly cried tears of joy.

2010: A symbol of goodwill and kinship

A critical time or the Indian community as the students’ crisis was playing out, the Indian contingent at the Anzac Day parade, resplendent in dark blue turbans and suits, with medals shining on their chests, was cheered on enthusiastically by onlookers. It generated much goodwill and brought in a sense of unity and kinship.

By 2011, word had spread within the community. The Sikh Regiments contingent now boasted more serving members of the Australian Armed Forces, and even more ex-servicemen, many of who were less mobile and had to have transport organised for them. The Indian community came out to support.

In 2012, the Anzac Day parade’s Indian contingent was covered gushingly on TV, bringing the Regiments’ participation to a larger mainstream audience.

In 2013, a second Indian contingent won approval to participate in the parade. Ten veterans from the Indian Navy and Army marched under the ‘Indian Defence Forces’ banner.

This year, in a special Anzac Day parade to make the start of the 100-year celebrations, the Indian contingents were rubbing shoulders yet again with mainstream veterans.

“Anzac Day is a reminder of the debt of gratitude that we owe as a nation, to those who are currently serving and to those who have served in the past,” Ajmer Singh Gill, President of the Sikh Council of Australia, told Indian Link.

“As we marched past the Cenotaph with our heads down in reverence, we could imagine, the pain and suffering of those who laid their lives so that we could live free, and the sounds of the bullets from the guns in their hands and the noise of the battle in the distance”.