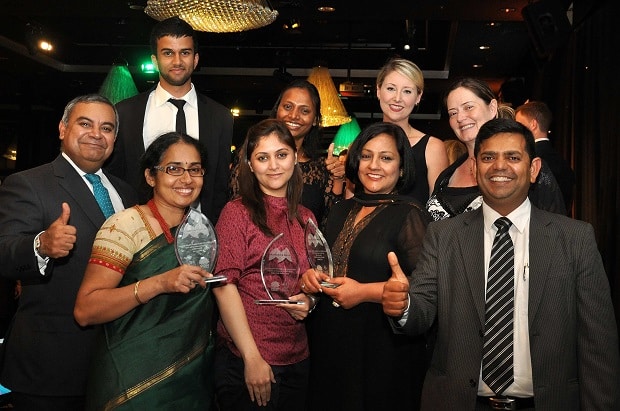 The Indian Link Media Group won 3 awards on Thursday 13 Februrary at the 2014 Premier’s Multicultural Media Awards: Best Print Report of the Year, Best Use of Online & Digital Media and Young Journalist of the Year: Ritam Mitra.

The Sydney-based Indian media group was nominated in 8 of the 12 categories. In one category, Best Print Report, all three finalists came from Indian Link.

Pawan Luthra, CEO of Indian Link said he was proud of the ongoing recognition that the media group has received, from within the community as well as from the mainstream. “To claim three awards yet again this year, reveals not only our dedication but also the high standards we set ourselves, I congratulate my team for their talent and their efforts,” said Luthra.

Best Print Report of the Year

Pawan Luthra’s piece on the analysis of an Indian Link election survey, conducted in the lead up to the last federal elections, was a clear and concise report on the issues which matter to the Indian community, and their perceptions of which political party would best fulfil their needs. No doubt it helped the undecided voters in the community to make their final electoral decision.

Best Use of Online & Digital Media

Always a step ahead, Indian Link has been on the cutting edge of technology since its birth. With increased functionality and a stylish, contemporary design, their website uses innovative technology, including the latest in website design to increase the user’s experience. With full social media integration, Indian Link is able to interact with their readers like never before. The Indian Link website is now available across all platforms for information on the go. It links the media group’s newspaper (through the e-paper), radio (which can be listened to online or through an app) and online content (linking in to social media and e-newsletters).

The Young Journalist of the Year Ritam Mitra, is a perfect example of the mentoring that Indian Link does for youngsters who have an interest in the field. Ritam was 17 when he first began to contribute to Indian Link. Today, at 21, finishing a law degree at uni and working for a leading Sydney law firm, he is one of the most prolific writers on our team. Ritam’s earliest writings were on youth issues and his great passion sport, but his body of work now includes pieces on politics, science, technology, media, new media, government policy, assimilation, even on Indian traditions as he sees them through his Australia-raised eyes.

Indian Link has now become the most awarded multicultural media group in Australia.

“I was impressed to see more than 110 entries were received for the 13 categories covering print, radio, TV and online media in this year’s awards, which are in their second year,” said NSW Premier Barry O’Farrell at the awards night.

“Congratulations to Indian Link, with the fortnightly publication taking out Best Print Reporter, Pawan Luthra, Best Young Journalist, Ritam Mitra, and the category of Best Use of Online and Digital Media,” Minister for Citizenship and Communities Victor Dominello said. The awards proudly recognise the role multicultural media plays in promoting NSW to audiences around the world, he stated.

“We would like to congratulate the other media organisations that won or were nominated on the night,” Indian Link Editor Rajni Anand Luthra said. “We also acknowledge the Government of NSW in providing a platform such as the Multicultural Media Awards to showcase our talents and efforts”.

Indian Link is a multi-media group which covers print, broadcast and web based publications. The only 24/7 Hindi radio station in Australia, Indian Link also broadcasts via its website and via its specially developed Radio App for android and smartphones. With fortnightly Sydney newspaper and monthly editions in all other capital cities of Australia, its strong web presence and innovatory e-paper, e-newsletter and high social media presence ensure their message is spread worldwide.