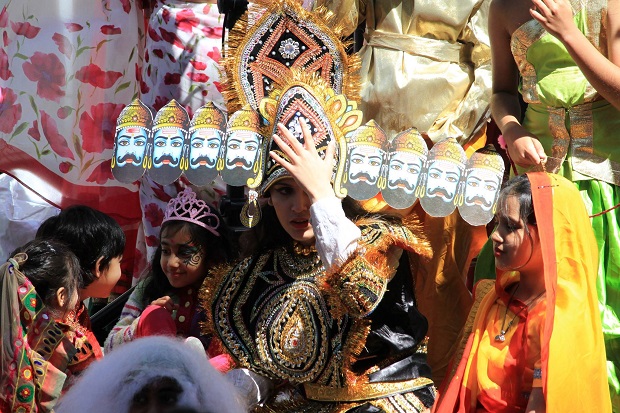 Reading Time: 4 minutesIt’s a Deepavali hat-trick for the Hindu Council of Australia at Martin Place

There was India in the air as office-wallahs in the city stepped out for lunch on a recent Friday.

At the ‘Deepavali @ Martin Place’ event, the sights and sounds of India seemed to have taken over.

The Hindu Council of Australia (HCA) made a hat-trick this year as it successfully organised one of the most happening Indian events in Sydney’s CBD. The program marks the start of the festive season for Sydney’s Indian community.

It was a perfect choice of location and time, as office goers had a laid back mood, with the weekend almost upon them. The decorative set up and jolting racket of Bollywood songs made them linger just that little bit longer during their lunch hour!

Dazzling stars, the littlies stole the thunder with their cute and innocent Bum Bum Bole gig. Cronulla PS, India Calling, IABBV Hindi School, Lotus Dance School and West Ryde Public School were some of the participating schools. The Gujarati Girls flowed to the tunes of the seasonal Navratri pick, the popular Gujarati folk song from the movie Ramleela, Mor Bani Thanghat Kare, which temporarily switched the mode from Deepavali to Navratri.

Earlier in the afternoon, the event officially began with a humble start by the lighting of the ceremonial lamps, and then paying respect to both Australia and India with their national anthems. MCs Astha Singh, Neha Jain, Sunali Bhandula, Emie Roy, Raina and Suvarnika took turns to introduce the performances that followed. A team of 15 organising committee members and 20 volunteers worked tirelessly to put together this explosion of entertainment.

While many spectators parked themselves in front of the stage grabbing the best spots, promising never to budge or miss a thing, others took strolls around the stalls pleasing themselves with henna tattoos, Indian costume dress ups, face painting, shopping, yoga, and sampling Indian food.

Many were surprised to hear MP Michelle Rowland remark that this was but a meagre prelude to a much bigger picture, the Deepavali Fair to be organised by the HCA at Parramatta Park on 19 October.

Consul-General of India in Sydney Sunjay Sudhir, Senator Sam Dastyari and other dignitaries, including Opposition Leader John Robertson and Geoff Lee MP, also graced the occasion. The VIPs heartily congratulated the Hindu Council of Australia for the successful turnout and their wonderful efforts.

John Robertson shared a personal note, that he was particularly pleased to be engaging with the Indian community as his son-in-law-to-be is a Gujarati.

The Chairman of HCA Nihal Agar congratulated the organisers and invited everybody to the Parramatta Park event on 19 October.

In the early days, members of our Indian community shared the Diwali spirit by taking a plate of mithai round to the neighbours. For Nihal Agar and the Hindu Council of Australia, this has now grown to inviting all the communities to come party with us. It’s the Deepavali spirit of reaching out.

It was indeed wonderful to see the crowds throng in the heart of the city to witness a little bit of India and celebrate our special festival, Deepavali.

For those who didn’t make it to the Martin Place event, it is time to get cracking and crackling, as Deepavali is here. It is time for fireworks, Ravan deham, feasting, lamps, gifts, fairs and some more feasting!