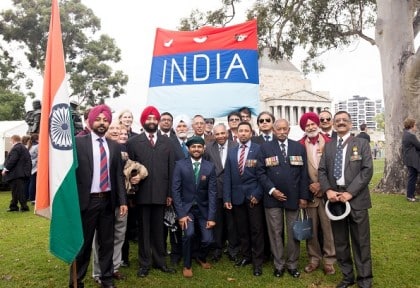 The Indian links at Melbourne’s Anzac Parade are many and varied. SUDHIR SAKHUJA reports

Anzac Day, 25 April, was commemorated this year with the traditional ceremonies in Melbourne. These included the Dawn Service, the official wreath laying, the Anzac Parade and the Commemorative Service.

As for the march this year, a wet day did not dampen the spirits of the large gathering which had built up to witness and participate in the march. Thousands of veterans, not just from Australia but also those from many other nations which had been a part of the operations during World War I and II, took part in the march.
Besides the veterans, descendants and personnel presently serving the Australian Army also marched down St Kilda Road, starting at the intersection of Flinders and Swanston Streets and concluding at the Shrine of Remembrance.

The Australian New Zealand Army Corps fought in World War I as part of the Allied Forces. Throughout the war Australian and New Zealand troops, or ‘Diggers’, sacrificed their lives alongside each other and their comrades in arms from other counties.
The eight-month long campaign unfortunately proved to be a failure and left over 8,000 Australians dead, but it marked the beginning of the Anzac legend of patriotism, bravery and  sacrifice.
Gallipoli had a profound impact on Australians and New Zealanders and hence 25 April became the day on which they remembered the sacrifice of those who died in the war. It was on this day in 1915 that the ANZAC forces landed on the heavily defended beaches of Gallipoli in the Dardanelles Strait.
The ANZACs, despite their name, were a multi-national body with many significant contributions from the British staff officers, the 7th Brigade of the Indian Mountain Artillery, Ceylon Planters Rifle Corps troops, the Zion Mule Corps, four battalions from the Royal Naval Division, the British 13th (Western) Division, one brigade of the British 10th (Irish) Division and the 29th Indian Brigade.

This year, the Indian contingent of veterans in Melbourne was a sizeable one. Twenty veterans, led by Major General Ranjit Nadkarni, Vishisht Seva Medal, participated in the parade. An infantryman from the Maratha Light Infantry, he has had the privilege of organising the Indian contingent for last 10 years in Melbourne. Before retiring his uniform, Nadkarni commanded a large sized Army formation and was also the Chief Instructor of the Army at the prestigious Defence Services Staff College located at Wellington, near Ooty in Tamil Nadu.
Marching alongside him was Major General Amrit Sandhu, an ASC veteran from the logistics branch of the Indian Army. Some visiting veterans such as Col K Christopher of the Armoured Corps (visiting from Jalandhar, Punjab) also participated. The youngest veteran was the Indian Navy’s Lt Cdr VS Sahota, who has just made Australia his home.

Speaking to Indian Link, Maj. Gen. Nadkarni said, “Indian veterans can be great torch bearers of the Indian community in Victoria.”
Col Sameer Roychudhury from Indian Army’s Education Corps took the lead this year to coordinate the march of the Indian veterans.
After the march, the families of the veterans joined in for drinks and lunch at the Indian Consulate.

Australian Army reservist and palliative medicine specialist Captain Dr Sandeep Bhagat of Melbourne, also participated, proudly wearing his decorations. He was accompanied by his wife Harvinder and sons Kaustav and Krishang at the Commemoration service.


Captain Bhagat told Indian Link, “The dawn service was very wet and hence more meaningful. Back in the day, those who served faced far more austere circumstances, especially in the trenches and hills of Gallipoli. Our two boys were up at 0415 and were very happy and proud to be part of the commemoration. No iPad, iPhone for most of the day, and still happy – don’t get to see that too often! Today I felt they were truly grounded in the spirit of commemorating the sacrifices of our soldiers, including their own great grandparents and grandparents, who have all had military careers.”

Captain Bhagat has served with the Australian Defence Forces in Afghanistan and UAE.
Interestingly, Corporal Gordon Sellar, in his full Australian Forces regalia, the son of a veteran from British Army also joined in. Gordon’s father Major Benjamin Sellar was seconded to the Indian Royal Signal Corps. Gordon himself served the British Army’s Signal Corps as a musician and later also the Australian Army and Australian Air force. He served in Vietnam in 1969. Gordon was born in Madras (now Chennai) and lived in Jabalpur too.

“It is a great feeling to be meeting up veterans from the Indian armed forces in Victoria. I have very happy memories of my early years in Jabalpur. I wish that I could one day get to visit my birth place again,” said an emotional Corporal Sellar.