In remembrance of Bud 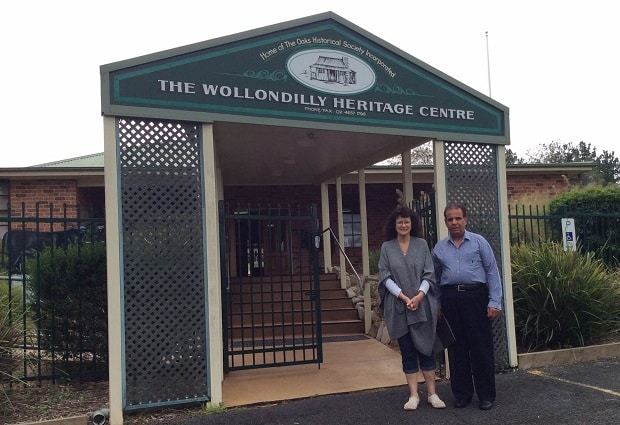 After a prolonged absence, the staff and management of Camden Hospital are preparing to welcome back an old friend. A plaque commemorating Wollondilly businessman Bud Singh which went missing years ago, is to be reinstated at the hospital in the coming months.

Bud Singh was a benefactor of the hospital in the early 1900s. He donated generously to the hospital for many years. In recognition of his services, Bud was made a life member of the board in 1919, and his name graced a plaque in the Camden District Hospital. But with the passage of time, history got muddled. The plaque was removed during an upgrade of the hospital years ago, never to be seen again.

Now through persistence, research and collaboration with officials on many levels, Sydney resident Baljinder Singh has managed to persuade the hospital to set the record straight. To grant Bud Singh his rightful place in Australian history, the Camden Hospital management is having a new plaque made in commemoration of his services, which will be unveiled and restored at a special ceremony with prominent community members, politicians, staff and management of the hospital in attendance.

Baljinder Singh did not set out to seek justice for Bud intentionally; in fact he arrived in Australia in 1986 in quest of his grandfather who came here in the early 1900s and settled in Camden in 1936, never to return back to India. A desire to uncover his roots put Mr Singh in contact with Len Kenna and Crystal Jordan, directors of the Australian Indian Historical Society. Both these eminent historians are currently researching Australian-Indian history and aim to publish a series of books to correct inaccuracies and omissions about the contribution of Indians and people of non-British origin to the development of the Australian nation.

It was through Mr Kenna that Mr Singh was able to learn that his grandfather, who had changed his name to Charles Singh and was fondly known as Indian Charlie, had at some point worked with Bud Singh. Bud was quite well known in the Camden community at the time. This sparked Mr Singh’s interest to know more.

Bud Singh was born in 1873 in Punjab and arrived in Australia in 1899. He maintained that he was an ex-cavalry man in the Indian army. Bud started his Australian journey as a hawker with a basket on his head, selling various items on foot. He soon acquired a horse and a cart and went on to own a general store in Yerranderie. His astute business sense saw him invest in the silver mines in the area and earn good returns.

Mr Singh described Bud as a gentleman. “He was a pioneer, a prominent businessman and a community-oriented person who was a well-respected Camden resident”, he stated.

Bud was often asked to present awards and medals at sporting events for cycling, athletics and rifle clubs. He was a member of the Camden Red Cross Society and the Camden District Hospital, and donated to both regularly. Bud Singh returned to India a very wealthy man in 1926.

Snippets of information collected from various sources suggest that Bud was a feisty character with an exaggerated sense of self-importance.

Mr Baljindir Singh is not related to Bud in any way but he insists it was important for him to have the commemorative plaque restored at Camden Hospital, to convey a message of unity and harmony to ethnic communities of Australia.

“Through this action I want people to know that Australia is a great country, and Indians and Australians have worked side by side for hundreds of years without any issues. It was the Anglo-Saxons who recognised Bud Singh’s services years ago and honoured him as a benefactor of the hospital. New arrivals should feel proud of their ancestor’s contribution to the building of the Australian nation. They should take ownership of their adopted country and appreciate the opportunities that exist here”, he stated.

Mr Singh highlighted that he met with no resistance in his proposal to reinstate the Bud Singh plaque, and in fact the support extended to him from all quarters was overwhelming.

He wished to thank Mr Kenna, Ms Jordan, Jillian Skinner – Minister of Health, John Robertson – Member for Blacktown, Lara Symkowiak, Mayor of Camden, staff and management of the Camden Hospital and everyone else involved in making this mission possible.