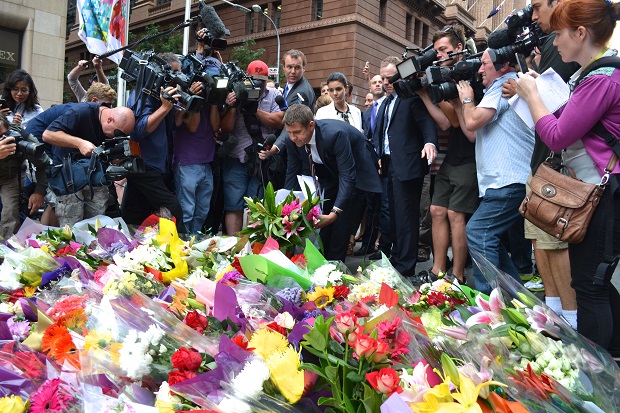 Reading Time: 3 minutesSydney reacts to recent events with a show of strength

After the shocking and horrifying siege that took place in Sydney into the early hours of the morning of 16 December, it would be easy for the Australian public to fall into behaviours that illustrate despair, fear, and suspicion.

After a 50-year-old man took hostage workers and customers of the Lindt Café in Martin Place, and the tragic ending of the 16-hour siege, tensions were running high. The man had displayed an Islamic flag, and there was speculation that this might be a terrorist attack.

Although we now know that this was a ‘lone wolf’ attack – an act by one man with ideologically extreme views who was already convicted of other crimes – there was the predictable public backlash against Muslims and the Islamic community. There have been social media comments filled with hatred and abuse, as well as attacks against Muslim women in the streets, and many expected these attacks to escalate.

It shouldn’t be as surprising as it is, but rather than having this heartbreaking attack divide us, Australians have come together in a remarkable show of solidarity with their Muslim brothers and sisters. In this dark moment, the #illridewithyou hashtag sparked a movement that deserves the spotlight.

The #illridewithyou campaign was sparked by a simple gesture from Rachel Jacobs who, after seeing a Muslim woman fearfully removing her headscarf when boarding public transport yesterday, not only told her to put it back on, but offered to accompany her so she could feel safe. This kind gesture sparked more than 65,000 supportive tweets using the #illridewithyou hashtag in its first three hours, showing a strong stance for love, acceptance, respect and solidarity.

Australians and Australian-Indians have offered to accompany those who wear religious attire and feel unsafe to travel in the aftermath of the Sydney siege. People have started offering rides, company and posting their commute details, offering to ride with Muslims who feel unsafe as a symbol of solidarity, and to also provide safety from racially motivated attacks.

It is crucial that in a time when the world faces so much hatred, and acts that any peaceful society would condemn, that we work together to counter racism and show compassion.

Instead of reacting with hatred, Australians have shown that they are truly a loving and accepting society. Together we stand united against hatred and bigotry.

Welcome to Australia’s Director Brad Chilcott says, “#illridewithyou, along with people of all faiths and no faith gathering in mosques, synagogues and churches last night to pray for the hostages and for unity, has demonstrated to the world how Australians respond to acts of violence and terror. We refuse to be divided and commit ourselves to one another in solidarity and compassion.”

Mo Al-Khafaji, from the Muslim community says, “It is heart-warming to see that in difficult times like this, the Australian community responded in such a beautiful manner to strengthen the unity between all cultures living in Australia. It is good to see that more people are realising that an act of an individual or a group is not representative of their race, religion or culture. My heart goes out to the families of the victims. The Muslim community is grieving with you.”