IFFM kicks off in Melbourne 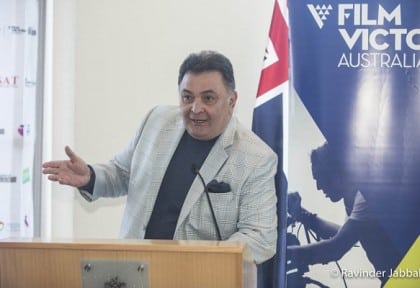 With a focus on women’s empowerment, the annual Indian Film Festival of Melbourne (IFFM) is underway

With a focus on women’s empowerment, the annual Indian Film Festival of Melbourne (IFFM) is underway in Melbourne creating a buzz amongst Indian cinephiles. A press conference was held ahead of the opening night to promote the lineup of films and events this year, as well as to meet the festival guests.


Local media came face to face with some upcoming actors, with great talent but only fraction of the celebrity in comparison to Festival chief guest and veteran actor Rishi Kapoor. Box office hopefuls like droolworthy Pakistani actor Fawad Khan, theatre actress Richa Chadha and Marathi stage actress Radhika Apte were in attendance.
In a female oriented lineup, the press conference included Indian playback singers Shalmali Kholgade and Suzanne D’mello with filmmaker Leena Yadav in tow. Screenwriter and film director Shagun Batra was also present to answer questions, though most of the Q&A was directed at Rishi Kapoor and Fawad Khan. Rishi Kapoor fielded his questions with humour while Fawad responded with effortless charm in his baritone voice.

For the uninitiated, it was guess the celebrity as the panel of guests awaited their turn to be asked a ‘good’ question. Fawad Khan, however, clearly stole the show with his articulate responses and ability to put people at ease. Full marks to Fawad for his social skills and media savvy that earned him respect and some newly converted fans.
IFFM Festival Director Mitu Bhowmick Lange ensured that the conference ran smoothly whilst promoting the program and thanking all the sponsors. According to her, this festival will feature many films that are directed by, or focused around, strong and vibrant female role models. Mitu is also the director of film production/distribution company Mind Blowing Films.

During the press conference, Minister for Creative Industries Martin Foley addressed the audience briefly to commend the theme of Women Empowerment, which, according to him, resonates equally with the Government and the Australian community. The Minister referred to the newly launched Creative States initiative, a $115 million investment to develop and keep the best talents across the diverse portfolio of arts, including films.
According to the Minister, this Festival gives people the opportunity to experience cinema from one of the most successful film industries and creates a real sense of community within multicultural Victoria. It also helps the growing ties between the Indian film industry and Australian film sector.
“Over 35,000 people took part in this Festival last year and I am sure we can expect a similar if not larger number of people as the popularity of the festival continues to grow and resonate across Melbourne and Victoria,” the Minister said.

Rishi Kapoor, who tweets about himself as the hyphen between a famous father and a famous son, expressed his great delight at visiting the iconic Melbourne Cricket Ground during his first visit to Melbourne. Rishi Kapoor will be receiving the Excellence in Cinema award for his enormously popular and successful film career in India.
Media curiosity continued in the form of questions from subjects ranging from film piracy, cultural affiliations between India and Pakistan, the role of Indian cinema in influencing social trends, breaking Bollywood ‘song and dance’ stereotypes, equality of women, freedom of cinematic expression and more. The conference ended with a flurry of interest in acquiring selfies with the celebrities before they were whisked away by security for media interviews.
- Advertisement -
Share
WhatsApp
Facebook
Twitter
Linkedin
Previous articleState of Nostalgia: Mizoram
Next articleHis Holiness Pramukh Swami Maharaj, head of BAPS, is no more