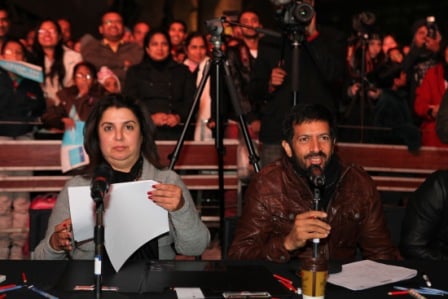 Reading Time: 3 minutesFederation Square comes alive with the sounds of a dance comp

Don’t be mistaken into thinking that the Indian Film Festival of Melbourne is just about film. On the evening of Saturday May 4, Federation Square came alive with the sounds of Bollywood, Kollywood, Tollywood and more. To help commemorate and celebrate 100 years of Indian cinema, there was dance, music, and laughter, and special guest judges: Farah Khan, Kabir Khan, Prabhudeva and Girish Taurani.
The stage was overtaken by Australian performers young and old, participating in a Bollywood dance contest inspired by a century of Indian cinema. Melbournians and the Indian Film Festival’s guests of honour witnessed the incredible passion that many Australians have for Indian cinema with each dance performance.
The night was so surprising in diversity and talent, that I think Ms Farah Khan’s socks, were quite literally, knocked off. Farah Khan, a brilliant choreographer, director, and actress, was a guest judge and guest of honour. She commented many times on the contestant’s enthusiasm, talent, humour, and grace.
She had probably never expected the diversity of contestants, ranging from the indojazz style of the young Shamiak group, to the enthusiastic, endearing, and rather erratic performance of a Punjabi inspired interpretive dance, performed by the Australian born Owen Langford. There was also another performer with immense grace, a lady-man dancer who performed to a female Bollywood vintage classic, who’s technique was pure grace and an absolute pleasure to watch. Farah at one point was so inspired by this lady’s passion that she ran in and joined her for a few moves.
The line-up of performers also included Spin City Salsa, whose routine won them one of the top awards on the night. Salsa proved to be a fantastic match to the song Chamak Challo. There were also a number of dance groups that performed to medleys which fused classical and traditional, with modern music and dance. One dancer performed to the Lagaan hit, Radha Kaise Na Jale, and then followed this with a performance to the new hit, Radha (likes to party) from Student of the Year.
Females weren’t the only participants involved. A fantastic all male martial artists group blew the audience away with their acrobatics, speed and power. A number of male artists performed solo, with some imitating the styles of the famous Salman Khan, Akshay Kumar and more. We saw RNB grooves, break dancing, and popping, AND we got to watch Prabhudeva moon walk across the stage, and teach us some of his signature moves.
The entire evening was complete entertainment and it’s quite possible that this evening did prove, as in Prabhudeva’s recent film, that Any Body Can Dance.
Prabhudeva, actor, dancer, chorographer, director and honorary guest judge, was joined by Kabir Khan, documentary and movie director and by Girish Taurani, up and coming actor, who you will see in his musical film soon to release, Ramaia Vastavaiya. All judges I believe enjoyed their night and I’m sure there will be some performances they will not forget.
Overall, this year’s IFF Bollywood dance contest held at Federation Square in the cold, under the stars, proved to be a perfect warming distraction and a night full of hours of diverse and engaging entertainment.
More photos here
Congratulations to all the contestants who participated at the Telstra Bollywood Dance Competition 2013!