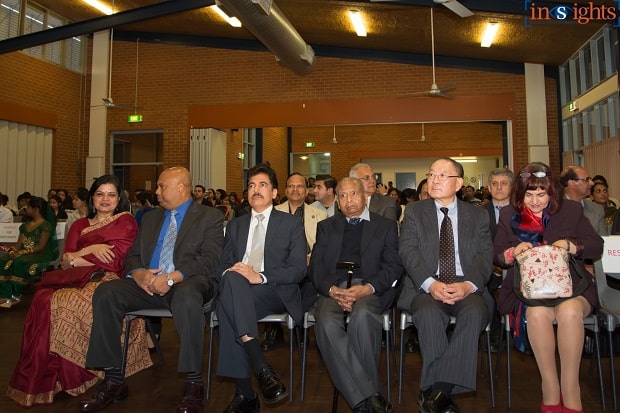 Hindi Shiksha Sangh (HSS) Australia recently celebrated its silver jubilee of incorporation in the form of a special event held at the Glen Waverley Community Hall. Over 350 people attended the event, including leading luminaries from the subcontinent community such as Mr Rakesh Kawra, Consul Indian High Commission; Mr Jude Perera, MP Cranbourne; Mr Srinivasan, Commissioner VMC, representing the VSL, among others. Also present were three area managers namely, Mr Tony Kyoong, Mrs Connie Bramble and Mr Alan Feher from Dandenong. Addressing the audience, Mr Kyoong explained the vital role of VSL in supporting all languages to foster multiculturalism in Australia.
The program began at 5:30pm with the lighting of a lamp by Mr Kawra, followed by Ganesh Vandana. This followed a debutant presentation by two Dandenong School primary students, of traditional south Indian dance, which was greatly applauded.
Dr Narendra Agrawal, President of HSS briefly introduced the inception and progress of Hindi Shiksha Sangh and its role in promoting Hindi and Hindi education in Australia. Dr Agrawal’s address also highlighted the government of Australia’s recognition of Hindi as one of four priority Asian languages in the process to be included in school curricula (VCE), while also thanking the VMC for its support.
Dr Dinesh Srivastava, the late Dr RS Pande (posthumously), Mrs Indumati Pandey and Mrs Sudha Joshi were among those honoured for their contribution to the Hindi language in Australia since the past 25 years.
Past students Nupur Gpel, premier award winner, Ananya, topper of the year, and Gagan Sidhu who studied Hindi in Victoria, were specially invited to speak about their achievements during the function. Many speakers stressed on the need of expansion of centres teaching Hindi.
The organizer in-charge Mrs Manju Agrawal with her team, managed the event very well, using audio visual effects for the first time at HSS. The event included dances, speeches and skits demonstrating the knowledge and skills of the language and Indian culture, that students had learnt in their Hindi classes.

Mrs Ritu Shorey, Anshu Sinha, Mrs Shelly Khanna, Mrs Vibha Joshi, Mr Sameer Sinha and Dr Sandeep Bhagat need a special mention for their commitment. Mr Devindar Thethi directed a skit reflecting the role of Hindi in the life of the students. The contribution of all the HSS committee members which included several Hindi teachers, was appreciated.
Ananya, Bhavesh, Mukul and Khyati worked well as MCs. A raffle with cash prizes of $100, $50 and $25 was well received. The function ended with audio visual projection of a spectacular recording of the Indian national anthem sung by nine famous Indian singers including Lata Mangeshkar, Asha Bhosle, Hariharan, AR Rehman, among others.
In conclusion, HSS secretary Dr Umesh Gupta thanked the audience, guests and committee members for their presence and encouragement to HSS.
Hindi Shiksha Sangh Australia, an incorporated non-profit  organisation, gratefully acknowledges the sponsorship of Monash Council, Victorian Multicultural Commission, Victorian School of Language and anonymous donors who provided the souvenirs and cash donations.