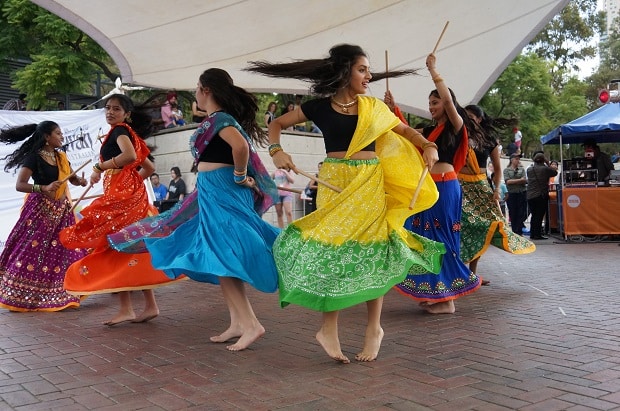 Sydney’s Tumbalong Park was recently transformed into an optical phenomenon as a spectrum of colours filled the air in the Park and its surrounds. Over 20,000 people from different communities witnessed a spectacular celebration as they came together and enjoyed Holi Mahtosav, the festival of colour organised by the Bhartiya Vidya Bhavan (BVB) Australia.

Yes, it was that much-anticipated time of the year – to laugh, have fun, meet, annoy, rejoice, break out, let loose, revel, unite, smear and most importantly, to celebrate!

While most of us would have visited the Tumbalong Park at least once since the last 11 years of the Holi Mahotsav, first timers who made their way through the harbour into the park would have had to follow their olfactory nerves and the incomprehensible sense of rhythm, holding back a barely concealed feeling of nostalgia and excitement as the colours of Holi on patrons accompanied by Bollywood music assailed their senses for the first time.

Although the scenario reminds one of the holy tales of Prahalad and the benign beginning of the spring season, here in Sydney it’s a rather warm welcome to freezing winter. But this was no reason to stop anyone from attending and enjoying this heavenly Holi haven!

The Holi Mahotsav began with a warm welcome by Shanker Dhar, Director – BVB and an inspirational and zesty discourse by the All World Gayatri Parivar group, followed by a series of performances by presenters from all age groups.

For the audience, it was a fulfilling day out as they enjoyed entertainment at its best, most notable being Aziff Tribal’s

The most fun to be had was in the battle rink, the official spot to throw colour and start smearing! People from other nationalities took the brave step of splurging and every face seemed like a masterpiece painted by excited artists who could not wait for even a second before splashing colour. It seemed like a decision of a lifetime to pick the right colour from the pallet filled with beautiful reds, yellows, greens, blues and pinks!

After the colour splash, it was time for some more action! Holi as we know is never complete without Bollywood dances, rendered here by students from Expression academy, Mango Dance Studio and the Geetanjali School of Dance. The crowd enthusiastically joined in for the Lungi dance, Booty shake, 1,2,3,4 and Thalaiva, with loud shouts!

By now the audience was experiencing, learning and understanding the true spirit of Holi, where all colours come together and unite to celebrate life, just as people from all different nations came together at the Holi Mahotsav, celebrating the multiculturalism of Australia through this multi-coloured festival.

After all this masti, food-fuel was needed to keep the zing and flow going. Queues at the stalls indicated the success of chaat, Punjabi, South Indian, Nepali and many other kinds of cuisine.

The Mahotsav was a three day affair with the Rath Yatra street parade, held at Sydney’s CBD, a maha yagya (sacred fire ceremony) and the dhuletti (colours fest).  Mr Gambhir Watts OAM and President – BVB Australia said, “The event was really successful. I am very delighted and due to the excitement, I could not even sleep on the night after the festival! With this response, we wish to expand the festival to one week, including weekdays of indoor activities”.

The Holi Mahotsav was a unique experience for everyone present and inspired me to pen the following lines that can be recited to Coleridge’s famous poem The Rime of the Ancient Mariner.

We played, nor breath nor rest;

As vibrant as a colourful rainbow

Upon a painted sky.

And all the worries did shrink;

Is there bhang to drink?”

On leaving our mood was colourful, and would certainly cheer us up for the rest of the year!